By far, one of the most frequently asked questions is about whether it is OK performing Umrah on a Saudi tourist visa.

We have had thousands of people actually go for Umrah using the new tourist visa for Saudi Arabia. Still, I know that many of you want the first-hand experience I had with it.

First, make sure you read about the Saudi tourist visa here.

Under the visa rules, you are ALLOWED to perform Umrah, even though at the beginning, many agents were scaring people off that this was not possible.

There are many scam looking sites that charge you extra fees for the tourist visa, be careful.

I issued all our visas without a problem, and even now in February 2020, I issued my mum’s visa in less than 5 minutes. Our tourist visa blog post has a step by step guide and a lot of information and experiences from people.

We flew in from Doha, so as we are still under blockade we actually went via Kuwait, we did a transfer and went into our flight to Jeddah.

Arriving at Jeddah airport, we queued at immigration for those coming under Umrah.

On our visa, I had ticked all the boxes, including Umrah. Many other people who have successfully entered have only ticked Umrah as well, so this doesn’t play a role. They most likely want to collect the data for their tourism purposes.

We arrived in the North terminal, which is where all non-Saudi international flights arrive. Jeddah has a new airport ( which is also where the train station is), but for now, it is available only on Saudia flights. This will hopefully change in a couple of months (Q2 2020).

We waited at immigration for around 20 minutes as they were a little understaffed, but once we approached, we had no issue. The lady on the counter took our visa print out and typed all the details.

Her English was not very good, but she was lovely, and she knew what to do. She said the visa was popular.

She took our fingerprints and photo, and after about 10minutes we were done. She gave us our visa copy back and the slip for exiting ( they give you a slip you have to give to the officer at exiting the immigration) and we left.

Once we exited our bags were waiting for us to be picked up. I think because we flew from Kuwait, most of the people going for Umrah were GCC, so they don’t need a visa and were processed faster.

Also, it is important to note that my husband was wearing Ihram.

Therefore we entered Saudi Arabia with an ihram to perform Umrah on a tourist visa without any issue.

Once you exit the airport, you will find a taxi stand opposite which you can negotiate the price (approximately 150SAR), or you can order an Uber / Careem.

Check out our transport guide here.

I still feel that especially with a baby Medinah is a better choice of airport for arrival.

Me at the Kabah, it was busy but the best time is after 9pm.

We arrived with our six-month-old baby in the hotel to check-in without a problem.

I am not sure if they asked us for a copy of our visas, but I would recommend you do have them. They did ask us when we checked into our hotel in Jeddah.

I enjoyed also visiting Jeddah as it gives you a different perspective of the country than just going for Umrah to Makkah and Medinah. It was a nice city to explore, and I highly recommend it. It also breaks the trip.

I was also surprised at the excellent customer service we received from Saudis. A lot of the hospitality jobs have been made available to Saudis, so it’s nice to see the changes. 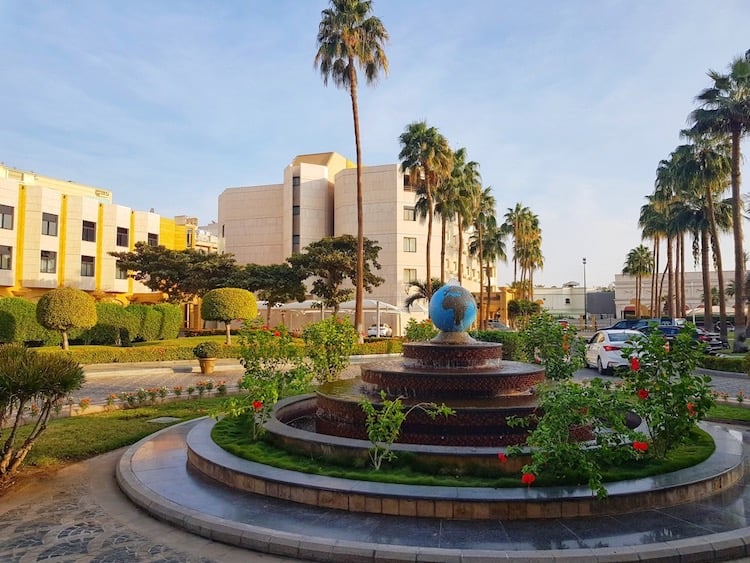 Intercontinental Jeddah while on our tourist visa

This is a frequently asked question about whether we need vaccines on a tourist visa. As  I have mentioned in the previous posts vaccination is not required on the tourist visa, it is however on the Umrah visa.

Now, personally we had the vaccinations from our previous Umrah which were still valid but I would have done them again. These days with all the viruses around and with the melting pot on Makkah I rather be safe than sorry, hence I recommend to always have an up to date immunisation.

Saudi is trying really hard to promote tourism in the country, so I expect some positive changes to come from the whole process.

This means that you will have a chance for cheaper hotels near the Haram if you go after Ramadan.

Thanks for clarifying so many questions I had in my mind. Perhaps there is one thing I'm not quite sure of is that I'm planning to go for umrah next year in last days of Ramadan. Since we came to know that umrah can be performed on tourist visa therefore, we've booked our flights already. We shall land in Madinah and then fly out of Jeddah. We haven't applied for the visa yet so do you think we can perform Umrah during Ramadan on a tourist visa, or the rules differ for Ramadan?

you can without a problem

First of all thank you very much for the detailed information. Your guide has truly helped me. I have booked a ticket for Umrah just recently. I am planning to go in a week time. I will arrive at Jeddah airport and hence will need to wear Ihram at the departing airport. I have everything sorted out except the meningococcal vaccine, which I haven't received. I am going on a tourist visa btw, do you think at immigration they will ask for my meningococcal vaccine status? I am just paranoid if I should change my flight to Madinah and change all my hotel reservations with it too.

It is not compulsory to have the vaccine on tourist visa

Dear sister, Can we open a bank account in Saudi Arabian Bank .send money in the account from UK when the rates good and pay the hotel when we check in there , rather than cash with you.

No, you cannot open a bank account in Saudi for this purpose. What you can do is look into the Revolut or Transferwise card which saves you money on the foreign exchange fee you will pay or you can prepare your hotel online before going in £ to avoid this.

Highly appreciated your work, on the Umrah, gave me some some strength to fly Solo Umra again... Fingers crossed Jazakallah.

We don't have any announcement now, I will post once they open border and we get some news.