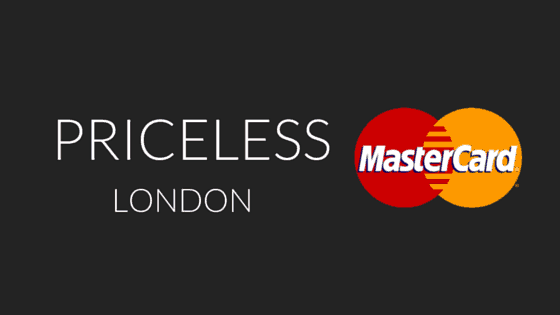 Many years ago Mastercard run a TV advert that really change how we few them today, They created the Priceless Mastercard advertisement series. In my opinion it is their biggest successful marketing campaign as it really spoke to the heard of their consumer and it made them laugh. If you have not seen some of their adverts then you can find watch it now. 🙂

On their super successful priceless advertisements, Mastercard started a deals website called priceless.com. They offer discounts on tours, travel, restaurants and many more deals that you can take advantage of. Continuing from the previous post on deals in London, they offer 2 for 1 to Madam Tussaud, London Sea Life and fast truck on the London eye among other offers.

As reader Ben mentioned in my previous post if you are interested in the London eye you can buy the ticket in advance and then combine it with the fast track option if you have paid by MasterCard. I have used their website several times as they offer nice fine dining and hotel discounts and you can save considerable money on attractions in the most expensive capitals around the world.They have the same Priceless versions for South East Asia and an Arabic version which is called Priceless Arabia and it has similar offers for local attractions but in the Middle East. I recently used their Uber 20% discount offer in Abu Dhabi and I loved it.

Depending on what MasterCard you hold you have access to more deals, for example they have a platinum card which is required if you want to book some attractions or hotels. I do not hold any platinum and executive card but my standard Lloyd works perfectly fine on their offers. I am not even sure if they have a way to check which card you booked and paid with. Overall I like their deals and I check them regularly to see if they have anything good before I travel. It helps you afford some luxury and style without breaking the bank.

Have you ever tried Priceless MasterCard and what is your opinion?