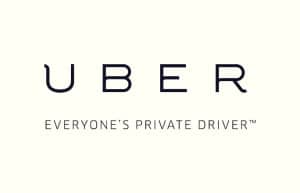 Uber arrived in Leeds, the “private driver” taxi app arrived locally. I love Uber and I have used it in many cities across the world and I really wanted it to arrive in Leeds so I can use them more often.

I did take the Uber twice and both my experiences were very different. The first one which totally ruined it for me was extremely disappointing. I was so much looking forward to using Uber that I felt like a kid before the Christmas tree. However it kind of went down from there. I then took Uber for the second time just to make up my mind and I was pleasantly surprised and had a totally opposite experience.

I logged into the Uber app, a straight forward process and called my taxi which arrived within five minutes. The Ubers available in Leeds are the UberX which are small cars just like the average taxi cars around here. When the car arrived it had a massive sticker on saying Uber, just like any other taxi company around Leeds. This was my first disappointment as Uber is suppose to be a “private driver” and not your regular taxi. I understand this is a requirement from Leeds city council and I guess on an UberX it doesn’t matter much however I am not sure I would take an UberLux or other more luxury cary with such a sticker on. I think it ruins the image and the whole experience of a private driver.

I have taken Ubers in Dubai, Abu Dhabi and New York and I loved how much of a private driver experience you feel. It was really cool and I think it is a selling point of Uber especially in such destinations.

However this was not the worst part. So far my Uber rides have been uneventful with great service and drivers. My Leeds UberX driver arrived in his Shalvar Kameez (Asian traditional clothes), the car was dirty and there were hairs on the back seat.So basically just your average Leeds taxi. You can only imagine how disappointed I was. It was like opening my Christmas gift and finding that it was the same as last year, I wouldn’t like this either. 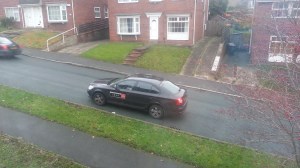 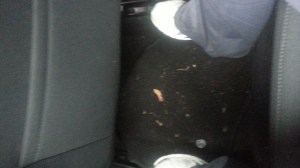 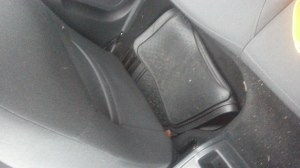 My driver was a lovely man and we did have a good chat about Uber and how he finds it. It was his  second day on Uber after leaving the regular taxi company. I know many taxi drivers like Uber, however my biggest fear is that the mentality of some taxi drivers in the area doesn’t match with the one of Uber. I can’t really explain it unless you live in the area. Take my word for it, it is not the best. I don’t want to generalise but my experience from taking taxis regularly is that most work in their Shalvar Kameez, dirty cars and are not very customer orientated. This is one of the reasons why I loved Uber because even though it provides the same transportation method the service was different and hence the experience.

I asked for my ride from home to the train station, as it is a destination I have done plenty of times before and on a taxi I knew how much it will cost. I paid £7 for the ride and I usually pay £7-8 for the same ride with a non Uber taxi.

I didn’t want to take an Uber for the second time but I did want to have a fair view of the service and not be biased in my judgement on the first ride. So I decided to use them again on the way home. I ordered my taxi from the city centre and as usual the ride arrived on time. I could track on which street he would come from so that I can wait at a convenient spot. This is a cool feature of having a GPS where you can track your driver. The car had the same sticker so it was hard to miss anyways but I was pleasantly surprised when my driver arrived in a suit and very clean car.

We chatted about Uber as it was his third day on the job. He used to work in a taxi before they arrived but now moved here as he believes he will make more money. I was happy to see he was presentable and he told me he always wears suits to work as they make him feel better and gives a good image.

I do have mixed feelings about Uber in Leeds, I haven’t taken any more rides but I will try it few more times. Currently I don’t see any differentiating factors between Uber and the regular taxi companies other than that they are cheaper. It takes me the same amount of time to log into the app as to call the taxi company and  also the sticker at the front makes it less appealing in my opinion.

Also another feature that I really was looking forward to trying was becoming an Uber driver. This option for us here is not available. I have friends in the USA who do a few hours every week and enjoy it and out of curiosity I wanted to try it as well. Unfortunately here it is only available to licensed professional drivers which I guess is the law here. It would have been a nice feature as it started with sharing and regular people driving Uber. I guess this feature will slowly die down at it will become a thing for professional Uber drivers.

I really hope that the mentality of the taxi drivers in Leeds changes as they ride Uber but I also know this will be a challenge for many. The positive is however that the big taxi companies in the area have started to treat their existing drivers much better and with more respect as many are leaving to join Uber. I was happy to hear this because it was a monopoly and many people were exploited. I think I won’t go out of my way to take an Uber in Leeds however I will when I am abroad as the experience is worth it.

If you would like to try out Uber in the UK and you want to use my referral code then please feel free. We will both receive £10 after your first ride.