I recently wrote an article about my deal on the Crowne Plaza Northwood hotel with the IHG Points Break for only 5,000 points. Now it is time to write about the actual stay in the hotel.

I had booked a flight on Are Lingus from Dublin airport to Boston and needed a hotel to spend the night before my flight. Thankfully Raynair flies this route from Leeds at very convenient times and it takes only 40min and £20, so it is really a no brainer.

Initially, when I booked the Northwood hotel I thought I had to pay for a taxi however the hotel does offer a free shuttle to and from the airport.

Once outside the airport, you have to go through the parking area, don’t wait in the bus stop outside the arrivals hall, and continue down to the coach parking. It is an easy 5-minute walk that is if you know where you going. It took me sometime to see which bus stop we should wait on as the sign for the Crowne Plaza hotel is very small and unless you are close to the sign you won’t see it. You need to wait just where all the hotel signs are. I know genius :), took me some time to figure this one out.

The bus arrived promptly and they operate every 20minutes which is awesome, starting from 5 am all the way up until midnight. The ride from the airport to the hotel was about 10minutes in a nice area with the Holiday Inn Express just next door as well. There are businesses, some residential apartments and the hotel opposite a nice park. It is situated on the same road as most hotels and airport businesses but as it is ‘tucked in’ it is very quiet. 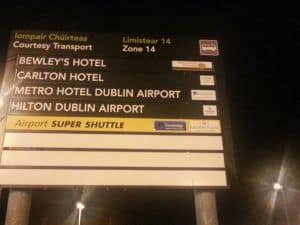 When we arrived they had some award ceremony in their restaurant so everyone was outside smoking and literally blocking the entrance, I had to push through. I went to the first person available and I didn’t notice she was a trainee until much later and after she told me she can’t upgrade me nor give me lounge access as they were fully booked. I said OK no problem I won’t make a fuss that I was not upgraded as a Platinum member as I believe IHG never upgrades their members or provide any other major services. She told me she can offer me a discounted breakfast for 8euros which I took.  However that’s when my husband pointed out to me she was a trainee, which on my part was such a newbie mistake. You should never get checked by trainees as they always go by the book.

So when she went in to print something I went to the manager who was sitting on the side asking what were the benefits for Platinum members. He said they offer lounge access and upgrade as  Platinum members and 650 extra points. That is when I told him I didn’t receive any of these benefits and that I just agreed to pay for breakfast however I would much prefer the lounge. He did try to convince me that lounge breakfast was only continental and to take the restaurant one, but all we need in a morning is toast and a coffee, so I find breakfast a waste especially when we have an early flight. They really didn’t have Executive rooms but I was happy with the lounge which is all I wanted.

He then removed the charges for the breakfast and offered me lounge cards that didn’t need me to be on the executive floor as the trainee told me earlier. 🙂 Problem solved and I was happy I can have a drink.

Once we went upstairs I really liked the room, I was impressed by the nice deco in the colours I like. It was a spacious room and the furniture did look new. The bathroom was standard however it did have a shower and a bathtub something that you don’t see in many European hotels. 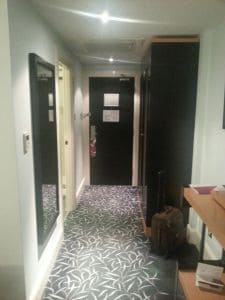 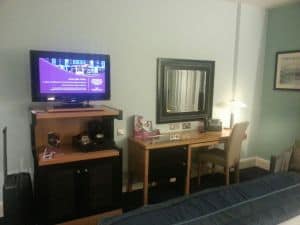 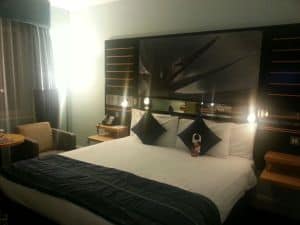 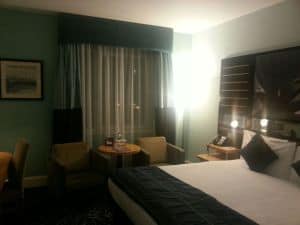 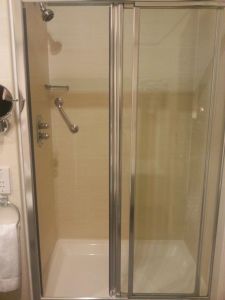 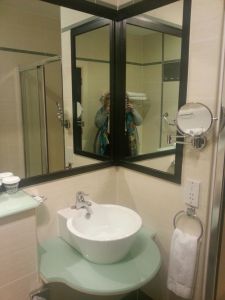 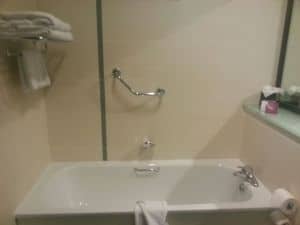 As we did have access to the lounge we headed there for a few drinks at night and in the morning for breakfast. It is situated on the last floor and you need a key to enter. The lounge is nothing impressive and I would say the colours were a little dark and depressing. The nicest feature was the fish aquarium which separated the food space from the actual seating sear. It had plenty of ofseating arrangements and a small desk if you wanted to work and a bigger table which I would assume can be used for meetings. During the evening no one was there, so we helped ourselves to some water and soft drinks and headed back to the room. 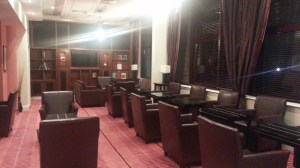 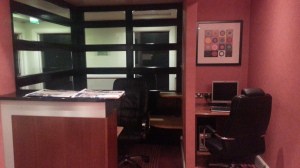 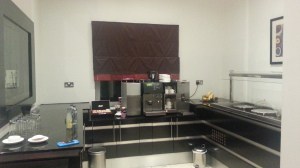 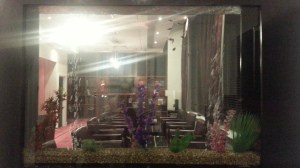 We did order some dinner as I there was no other option I believe due to the awards. We always contemplate whether to order one portion or two as we don’t know the sizes, however in this hotel one portion would have been enough. The food arrived after 40minutes and it was excellent and plenty of it. My husband ordered fish and chips which came with three pieces of fish enough to feed both of us. I had a burger which was equally big but both tasted great as you could see that the fish and the chicken were prepared with fresh ingredients. I would recommend their room service options. I think we paid in total 31euros for both meals and gratuity. Note that there are not many options once you are in the hotel so if you don’t want rooms service you need to pick up something before you arrive.

In the morning when we arrived there were an attendant and a few guests taking breakfast. The selection was OK and had the standard continental options. It is excellent for a quick morning breakfast before a flight or work and it had everything you would expect. As it was the morning I saw that actually opposite the hotel there is a beautiful park, perfect for a morning walk. 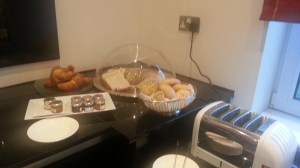 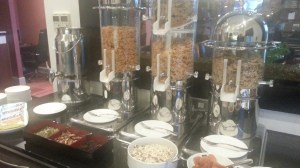 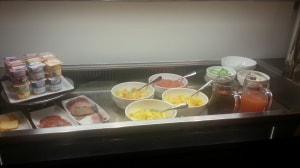 This for me was a deal-breaker to be honest. Usually, we come to the hotels for a good night sleep however it was not the case at least for our sleep. The mattress wasn’t to my liking it was very hard which made it uncomfortable to sleep and the pillow didn’t help either. We had only one pillow each which were synthetic and very low making it very unpleasant to sleep on them. I woke up tired and with my body aching which is not supposed to happen in a 4-star hotel. Maybe it was my room and the rest of them are fine but I would recommend the hotel to check their mattresses and at least invest in different kinds of pillows as guests have different preferences.

We were in a hurry so I didn’t mention this to the hotel at check out but I believe I should have. The lady checking us out wanted to charge us 190 euros for the night, which thankfully I did catch her before she charges our card. I did explain to her that our night was already paid for and the only charge is the actual room service she was happy to remove the room cost for us. So the night cost for this hotel was 160euro without breakfast or club access on a weekend, which is the same price I had seen on their website a week before I arrived. After check out we went straight for the free shuttle outside the hotel and we were in the airport in less than 10 minutes. On the way there the shuttle stops outside each terminal which is very convenient, rather than the coach station where you pick it up from. 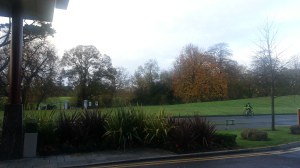 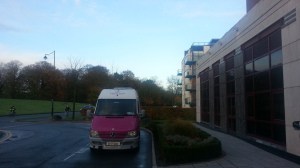 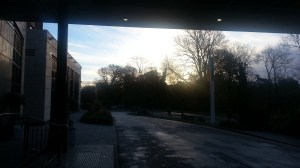 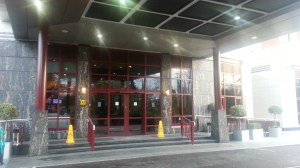 I did like the hotel as a whole, however, the night sleep was not great. I felt tired for the rest of the day. I had booked this hotel for only 5,000 points which are about £25 but had I paid 160euro for the night I wouldn’t have been as happy to let it go. Would I stay there again? I am not sure if I would pay this amount of money for an OK service, I might try the Holiday Inn Express next time which at least offer basic free breakfast and a bed to sleep. I think the price was very expensive for this property considering that the Copenhagen Crowne Plaza hotel was much better property and cheaper. I don’t think I would return unless I didn’t have another option. I also think they should look after their Platinum members better and not having to ask for the benefits but rather offer them to you.

Previous Post: « Accorhotels 40% Sale + Free Breakfast (in some hotels)
Next Post: Riding Uber in Leeds. Will I do it again? That is the question.

"Traveling - it leaves you speechless, then turns you into a storyteller. - Ibn Battuta" END_OF_DOCUMENT_TOKEN_TO_BE_REPLACED