Following my recent trip to Europe, it is time to check out on beautiful Budapest. There are so many things to do and see in Budapest in 48 hours you will definitely want to go back for more.

No wonder it is one of the most popular European destinations for a short weekend away. Being in Central Europe it is close to so many beautiful countries which are easy to reach by bus, train or plane. Plus it’s cheap! It has some of the cheapest five-star hotels in Europe, so the saying “travel in style” cannot be truer than in this city.

If you are planning a short weekend away to Budapest then I have you covered. Below are my tops things to see and do in Budapest in 48 hours! 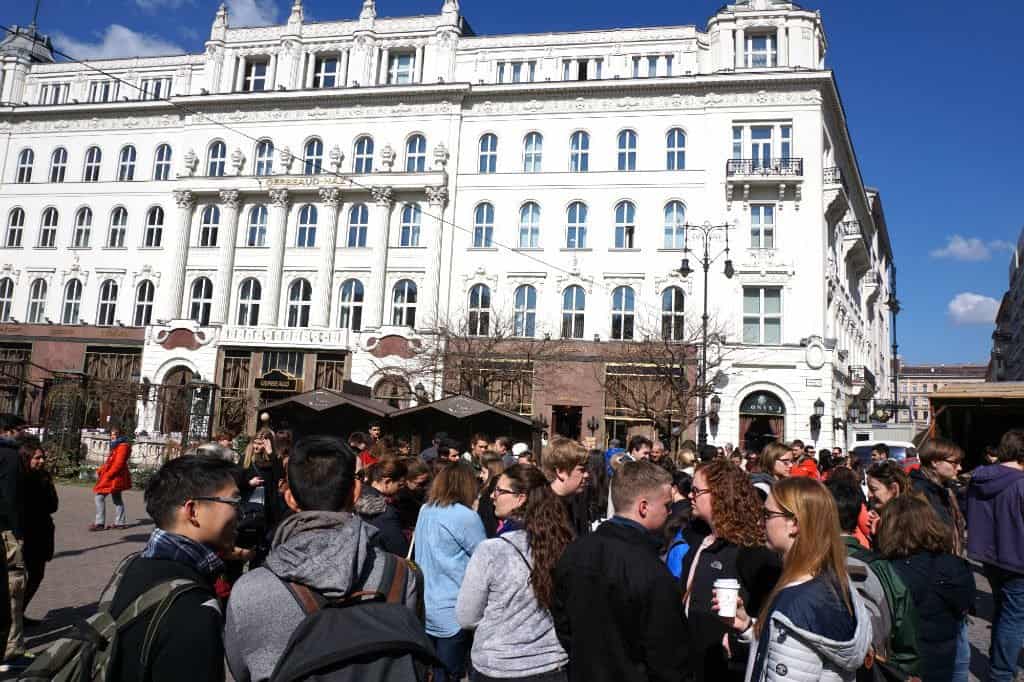 The best thing you can do in an early morning on your first day is to take the free walking tour around Budapest. The original tour is the best for quick and easy orientation around the city; plus it’s fun. You pay what you think the tour is worth it and you can have fun for a few hours exploring the city with a local guide. Definitely worth it for all the tips that they share with you to help you avoid the “tourist traps”.

After the end of your tour, you can have plenty of time to explore the Fisherman’s Bastion, Castle Hill and its surrounding area and St Matthias Church. Photos (selfies) of course are mandatory.

Read more: 3 Reasons Why You Should Include Free Walking Tours on Your Next Trip 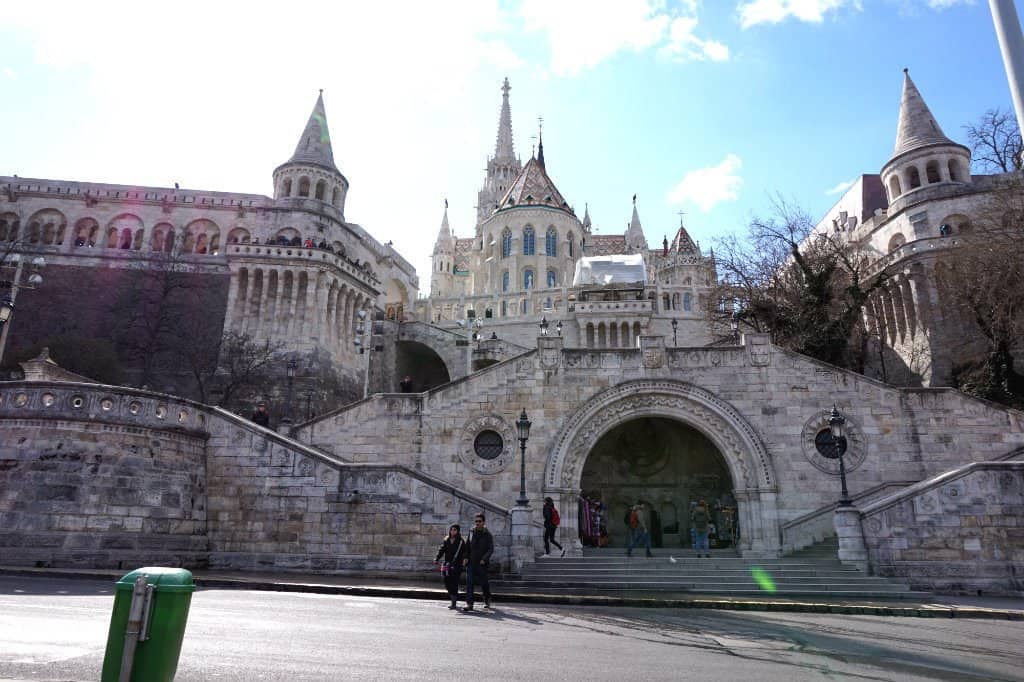 A visit to the Fisherman Bastion and the Castle area of Budapest offers some amazing panoramic views of the city. The Fisherman Bastion is a terrace in a Neo-Gothic style as a memorial to the fishermen who defended the Buda part of the city in the middle ages. It is the best spot to take photos in Budapest. While there don’t forget to visit Saint Matthias church right next to it. 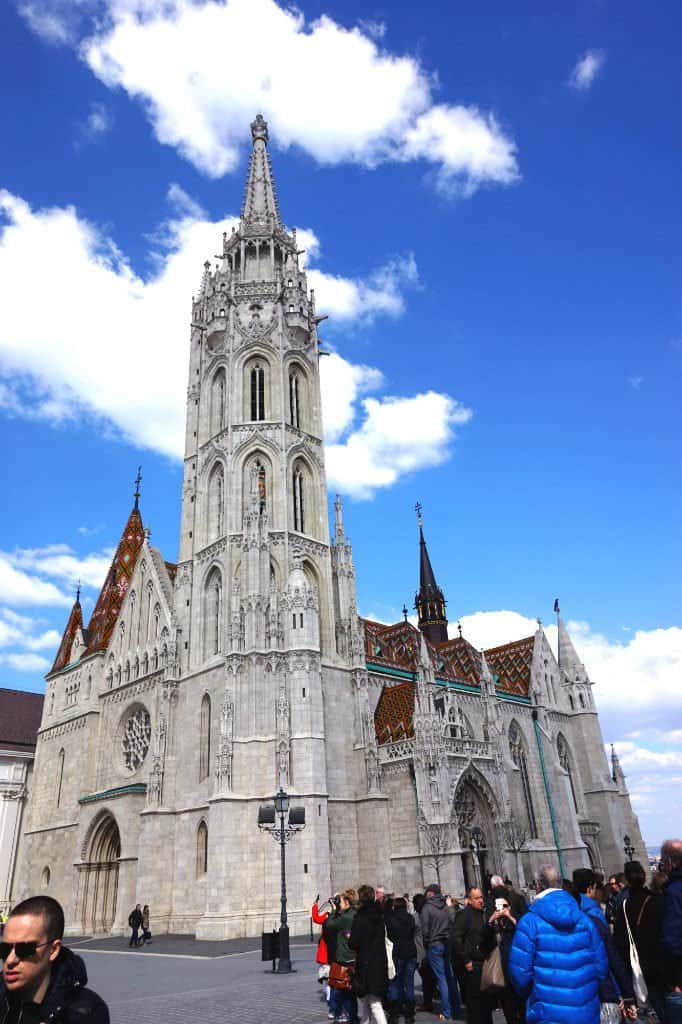 Saint Matthias Church dominates the Castle part of the Buda area. It is an elegant church with beautiful Gothic style architecture. It was used for the coronations of the Hungarians kings and you can easily see why. It is simply gorgeous! 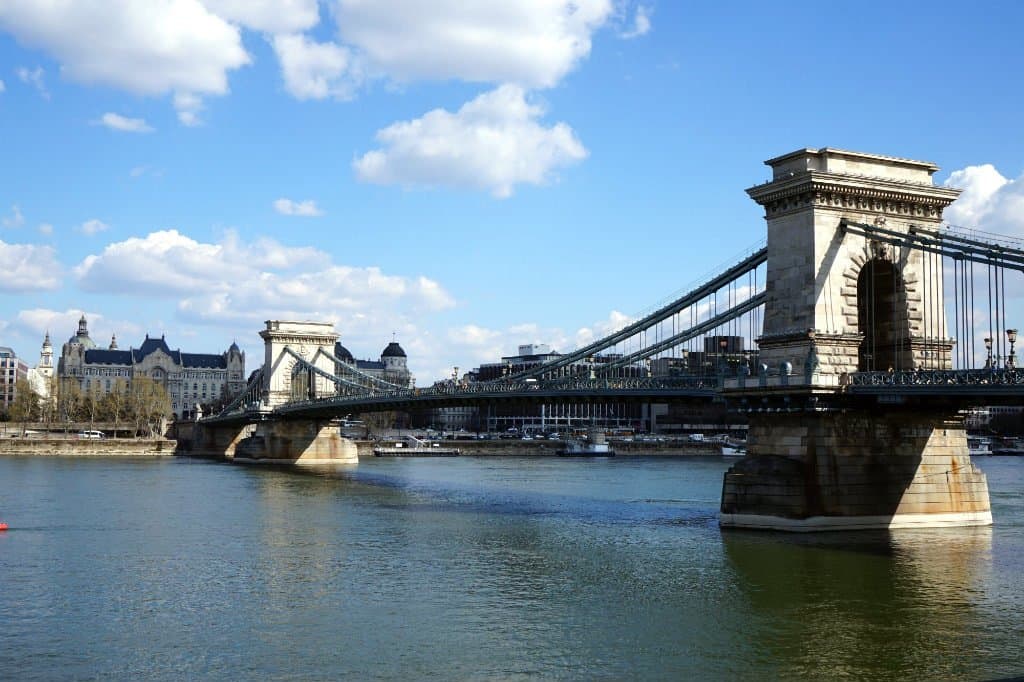 Oh, the famous Chain Bridge of Budapest. It must be one of the most notable landmarks in the city alongside Parliament. Even today the chain bridge is a main artery for connecting the two sides of the city; Buda and Pest. You cannot miss the chain bridge and you cannot avoid crossing it to get to the other side. However stop and admire the views and take some amazing photos of the Danube river, especially on a clear day. 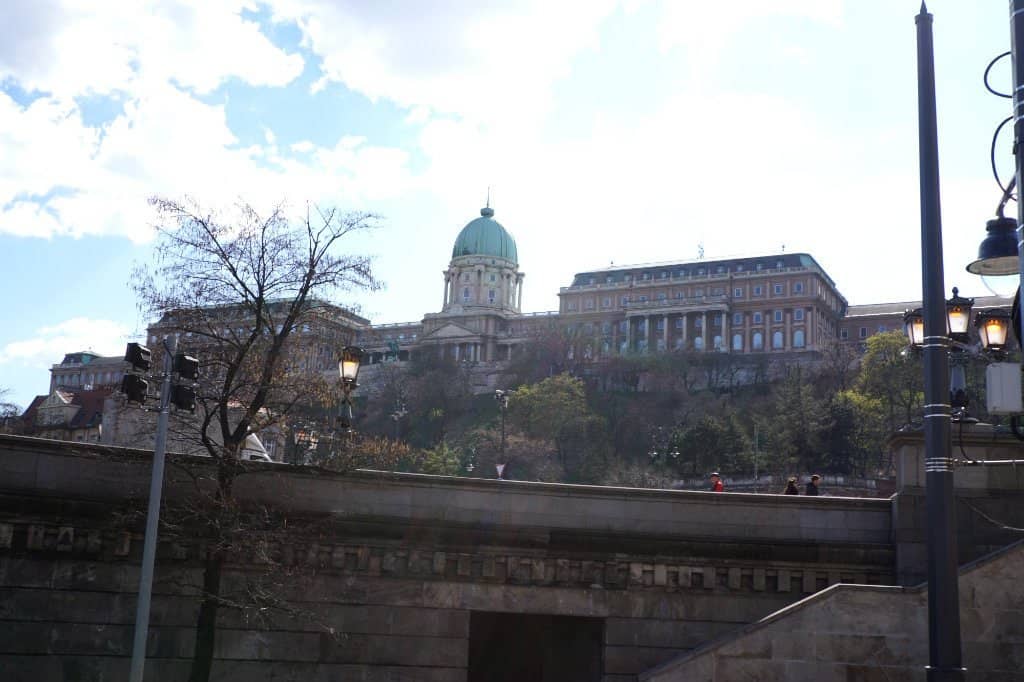 Originally built in the 12th century it took years to reach its current state. Today it is still a very important monument of Budapest, again located on the Buda side of the city. It is a towering impressive palace, 170m above the Danube, offering amazing views over the city. Though it requires you to walk up the steps to admire the view. You can, of course, pay for a funicular to take you up, but nothing beats the feeling of accomplishment you have after you walked it up. (I sure did!) Today the castle is a UNESCO Heritage Building and it hosts several museums such as the Budapest History Museum, National Library, and Art Gallery. You can visit the museums and several other rooms in the castle all year around. 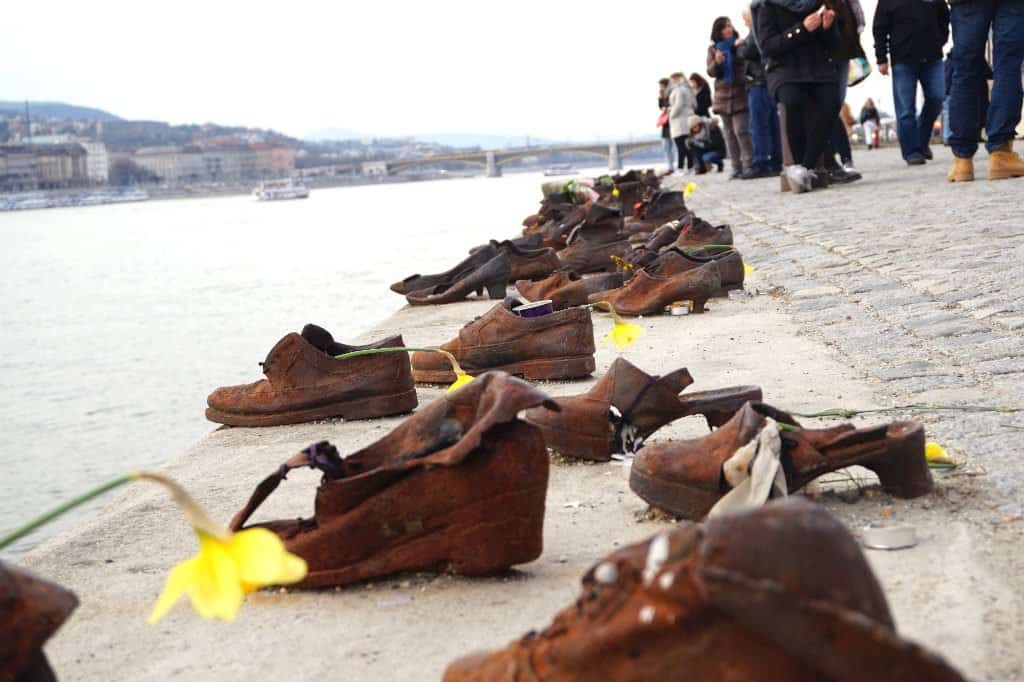 Budapest has a large Jewish community which represented 25% of the population before World War II. The Jewish quarter is not far from the Chain bridge in the city centre of Budapest. There you will find major Jewish monuments as well as the three main synagogues in the city. You can also take a specialised free walking tour around the Jewish quarter. Today the area has not only historical importance but it is also a bustling area of Budapest with great coffee shops and nightlife great if you want to get a real feel of what Budapest has to offer. 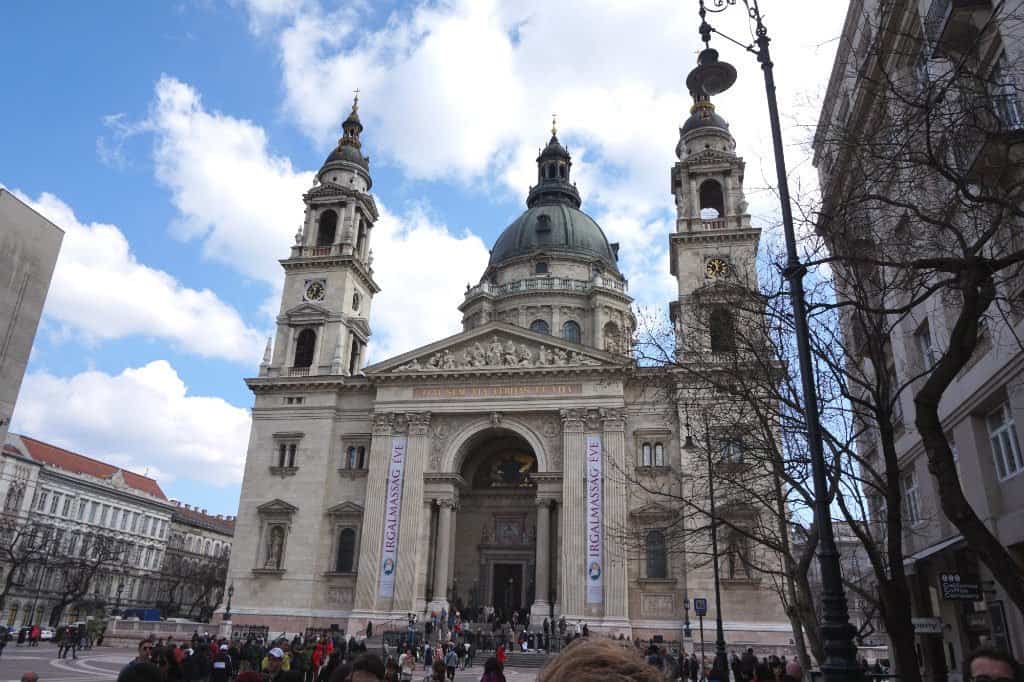 Starting from the Pest side of the city you shouldn’t miss St Stephen’s Basilica a short walk from the chain bridge. A beautiful church built in a neo-renaissance style it can accommodate up to 8,500 worshipers and offers beautiful views of the city on top of the dome. Definitely more opportunities for photo snaps. 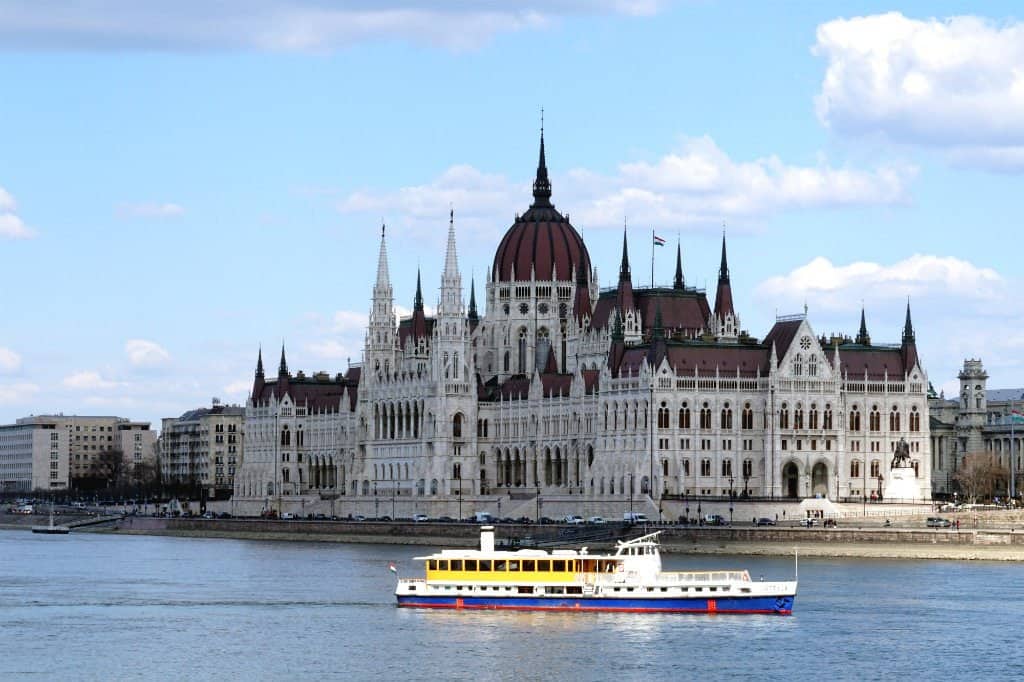 A short walk from the Chain Bridge and you will be outside the Hungarian Parliament. Spend some time admiring the building before visiting inside. It closely resembles the British Parliament’s Building as according to our tour guide the architect was inspired by it.

Take the Andrássy út from the Chain Bridge and walk upwards. It is a long long boulevard with many international brands and is considered the Champs Elysee of Budapest. Note that prices can be a little more expensive than some other European cities but if you want to do some shopping from your favourite brand then this is the place. It is a great place to just take it easy on your second day and enjoy the architecture. On the same boulevard, you will also find the House of Terror, a Museum documenting the effect of the Nazi and Communist regimes in Hungary. 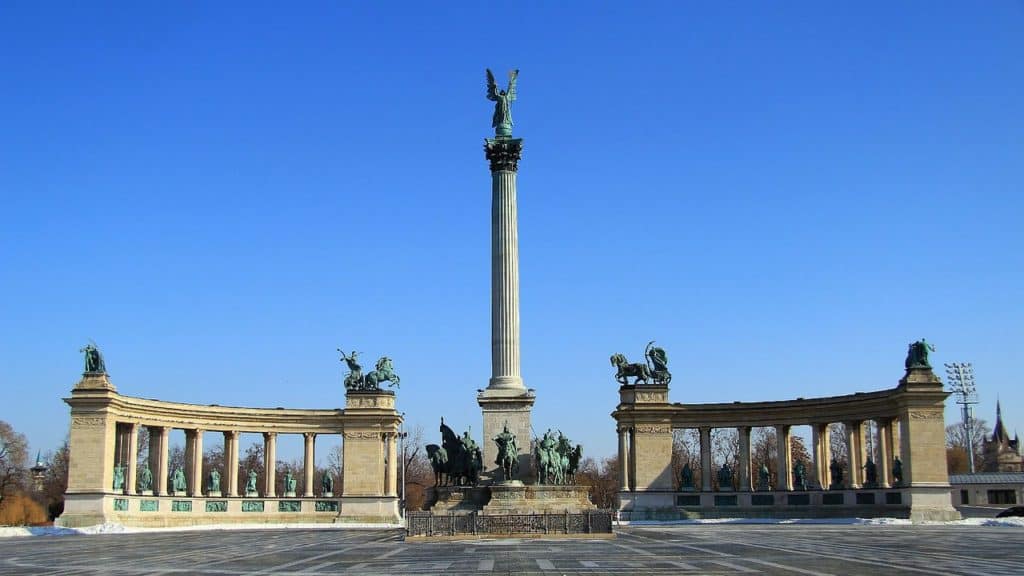 Further, up about 2 km you will find yourself at Heroes square, which is one of the major squares in Budapest. The iconic statue features the Seven Chieftains of the Magyars and other important national leaders, as well as the Tomb of the Unknown Soldier. 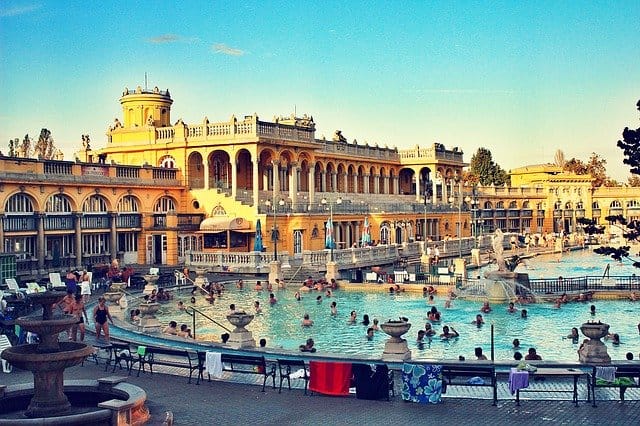 There is no better way to end your exploration of Budapest than in one of the main thermal baths in the city Széchenyi which was built in 1913. Budapest has over 125 thermal springs but by far the largest and most opulent bath is the Széchenyi Bath which boasts 15 thermal baths and three swimming pools; the water temperature is up to 38°C. The perfect way to relax and recharge after a long weekend of walking and exploring. Don’t forget you will need your swimming suit and you have to pay a small fee to enjoy the baths. A price worth paying for sure.

A walk on the Danube at Sunset 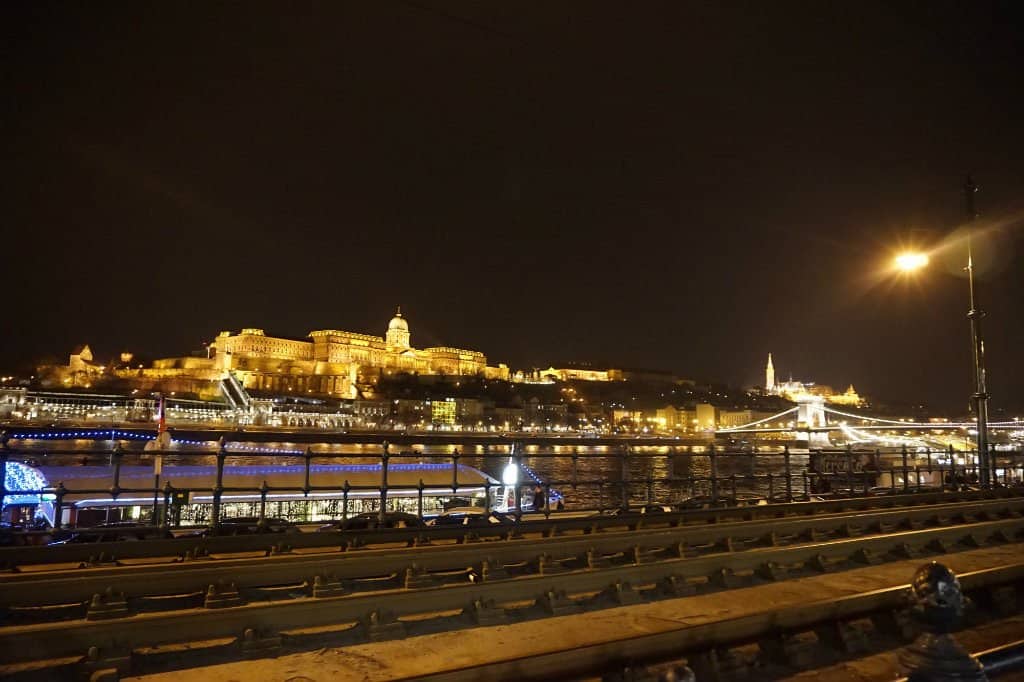 To conclude your weekend in Budapest head over for a walk on the Danube at Sunset. The long pomegranate is a perfect place to enjoy a walk and take photos of Buda and the Castle Hill. Spend some time exploring the bustling shopping area of Budapest Vorosmarty street. The whole street becomes alive during the evening until late at night with tourists and locals. You will find anything from international brands to local markets providing everything you might need when in Budapest. Also, don’t forget to taste some Hungarian delicacies.

Budapest is a gorgeous city and definitely one of those places that you can’t explore in 48 hours. But it’s a great start to fall in love with the city and visit again.