My review of the Aloft hotel in Me’aisam hotel, which is a decent budget option.

I kept looking at this property since the price was so low and when we needed a second room during the New Years weekend for my husband, I decided to go for it.

The hotel is in Production city in an area called Me’aisam next to the Jumeirah Golf Estate. There is nothing much built around it, and it is quite far from many popular tourist attractions, but of course, this is reflected in the price and fare deal.

I stayed in the Aloft in the Palm, a great property so I thought I would check out the other Aloft. I was also doing a Platinum status match challenge, so I needed some extra nights. 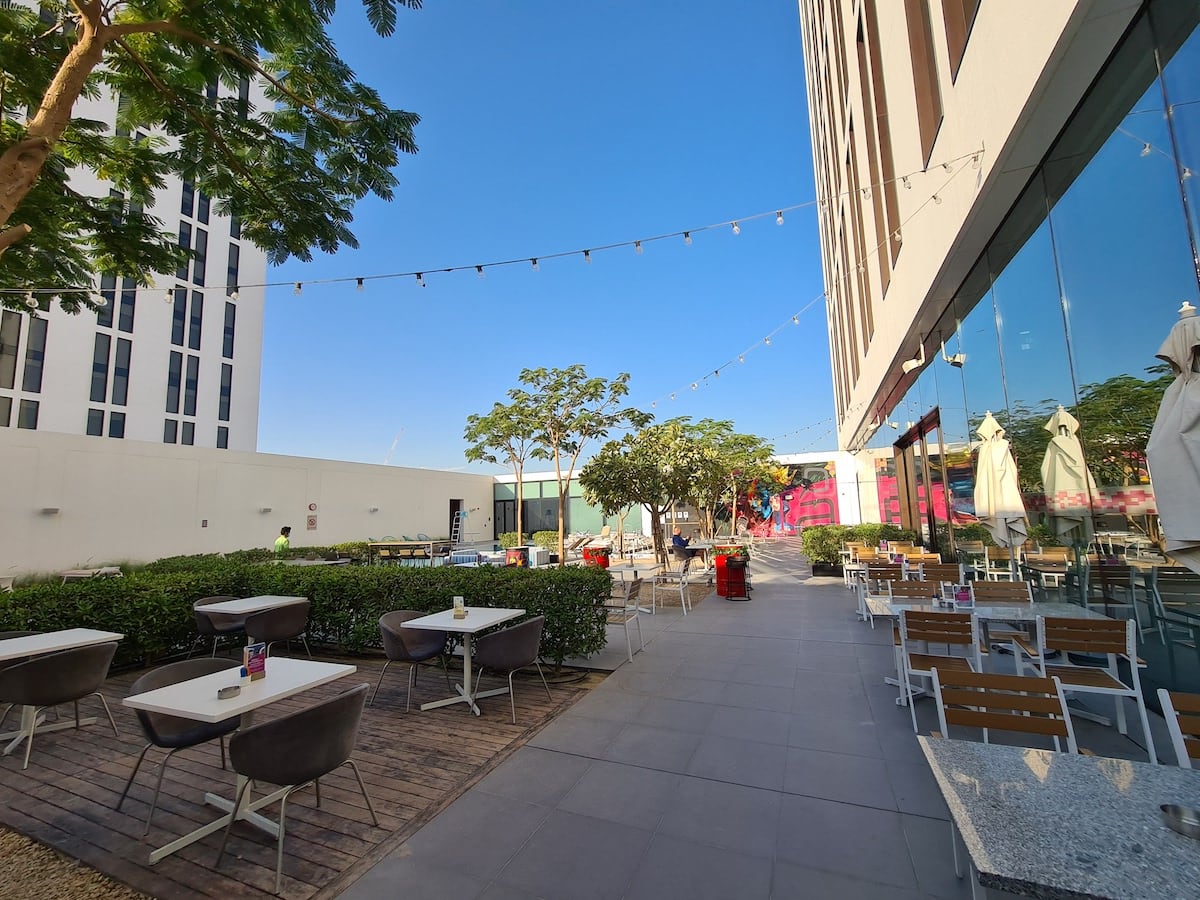 On the outside, the property looks very nice. There are two modern buildings in the middle of the desert sort of thing. One building is the Aloft hotel, and the other one is the Element hotel, studios and one-bedroom apartments.

Opposite the hotels, there is a shopping centre that is very convenient if you are staying and want to get groceries.

We went to check-in at 10 pm, and I had booked a king-size bedroom. At check-in, I was informed that there are no King-size beds in a non-smoking floor and that they will only offer us one on a smoking floor.

We agreed as she reassured us that their smoking floor opened only today and it is not smelly yet.

After speaking to the manager, she told us that there are no rooms available there, and she can only offer us a twin room. I felt that they had a room, but they didn’t want to provide it. 🤨

I told her I had booked a kingsize bed, and I would expect to have that. After some time, I politely asked if we can have them put together.

She did say it will take 10min, but it took 30min, and she only checked again because I went to the reception to ask.

Also, I found extremely rude that the whole time the manager was there with his back on us but not even once turned to acknowledge us and just politely say they will try their best to make the twin bed kingsize.

Also at the time, they didn’t even realise I was a Platinum member (through the status match), and when I asked for breakfast (she just said we don’t have it included), I asked that as a Platinum I would like to have this as my amenity.

Again, I felt she didn’t want to provide me with the service or Platinum options.

I am not the person to ask for upgrades or breakfast; I like when hotels acknowledge and offer this as I hate the “look at my elite status” thing, which is why I didn’t mention it to her until she didn’t provide anything.

Maybe, I had high expectation, but the Aloft in the Palm had good customer service, and I expected similar here.

Eventually, she did offer us a drink voucher, which I used for a non-drinkable mocktail at the bar – it was pure water, and milk and the reply from the bartender were that it doesn’t have alcohol. 😳

After collecting keys, I went to the room, and we realised the key didn’t work, so down I went again. 🤯

At this point, I just told the receptionist I am tired, and I expected better since she just gave me those keys. 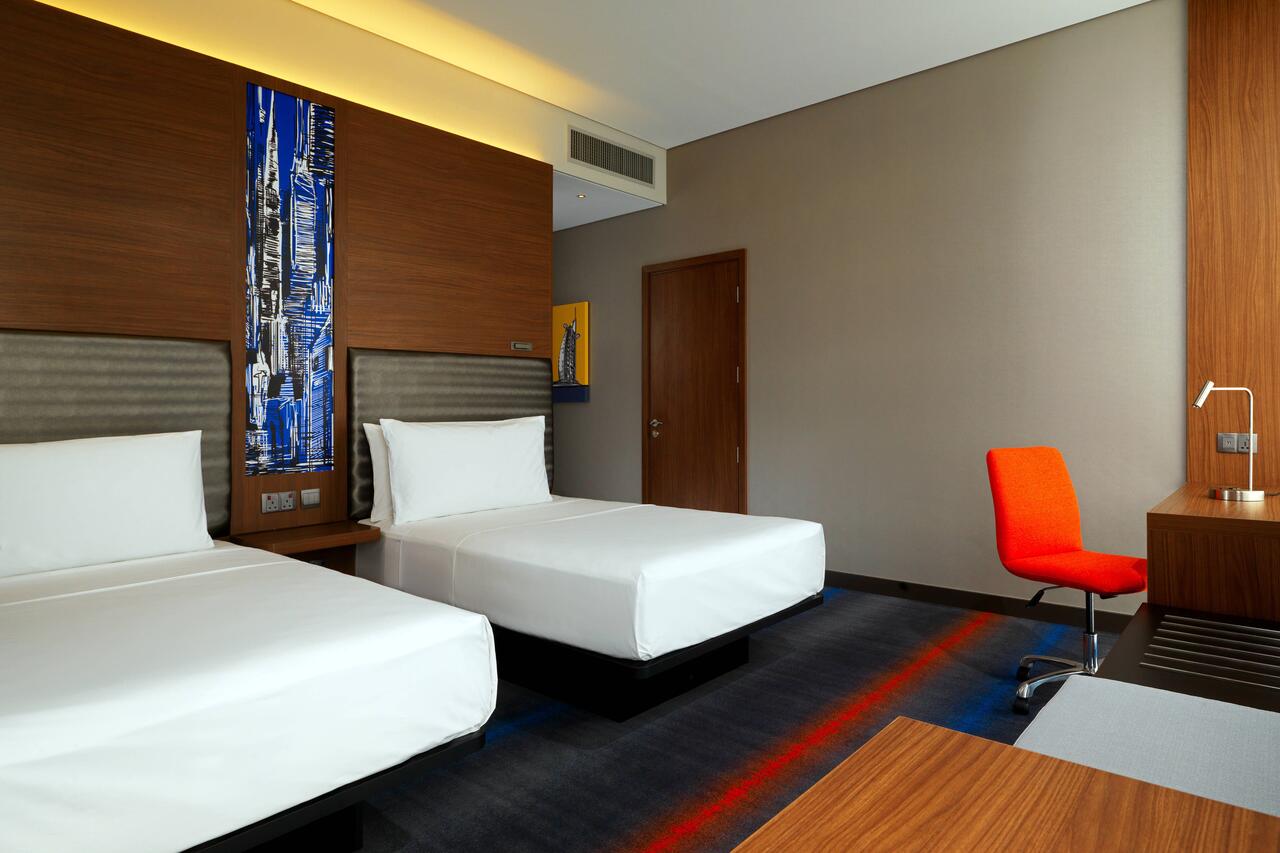 Photo credit: the hotel This is the same room we stayed in

We were given a room on the 2nd floor, talked about upgrades for Platinums with a view of the mall and the hotel’s parking. I think this was a better option than overlooking the Elements hotel.

I like the minimalist design of the Aloft hotel rooms. They have comfortable beds, modern finishings and just clean lines with a pop of colour.

The room and the hotel is new, so everything works as it should be.

The bed was comfortable, and I love their blackout curtains. 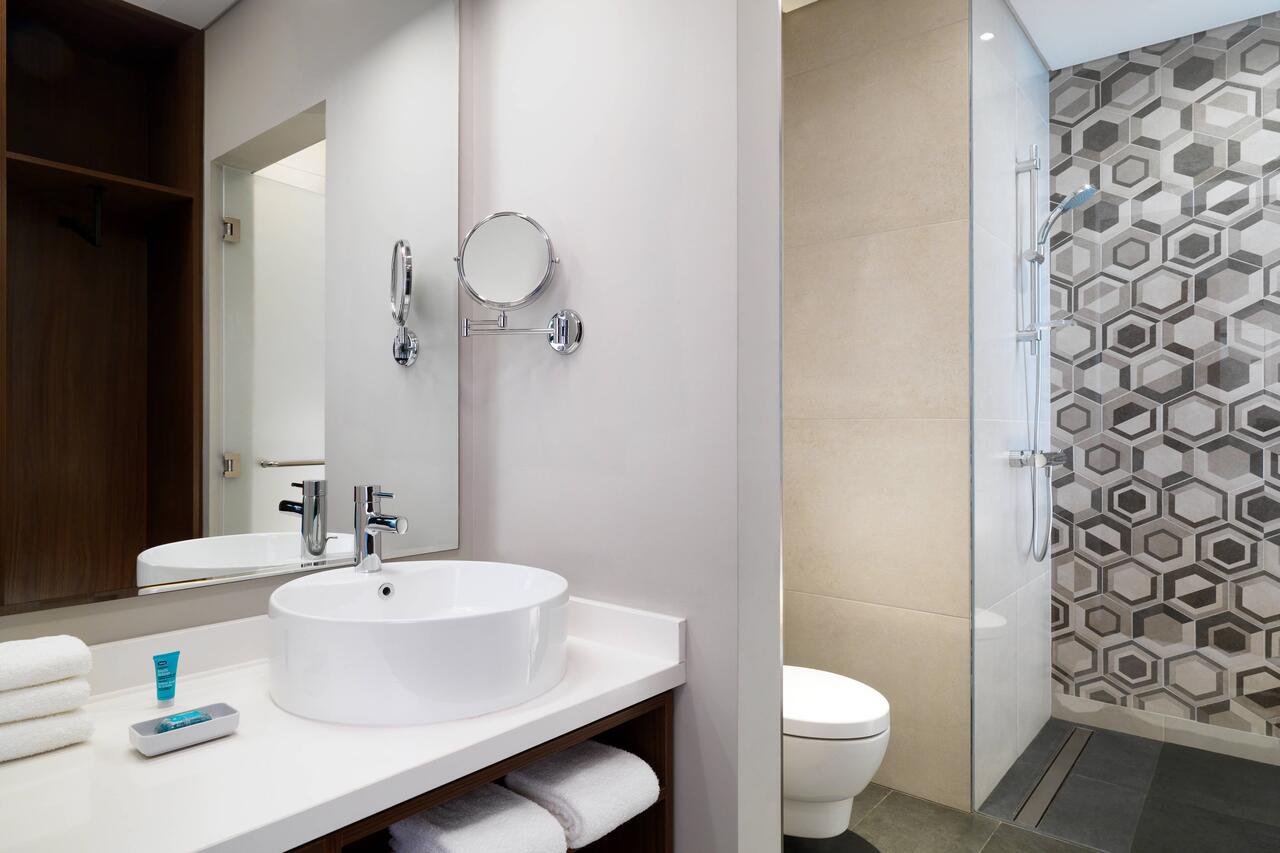 Photo credit the hotel
The bathroom was the same as this.

The bathroom is excellent and functional. However, I think the design could have been better. I liked the Aloft the Palm bathroom design more.

Sadly, one thing I found annoying is that the pressure in the shower was very low. You could hardly enjoy a shower. I was not sure if it was a general problem or just our room, but it would annoy me for sure if I were to stay there for a week.

After a good night sleep, I woke up thinking that maybe the staff is ok now and today will be a good day.

Well, we went for breakfast which was empty, and we were the only customers.

Due to COVID, you tick your order on a piece of paper. I wrote what I wanted, which was mushrooms, latte and hashbrown. I had also ticked English Breakfast, but I didn’t realise it was for tea until I asked where my breakfast was. 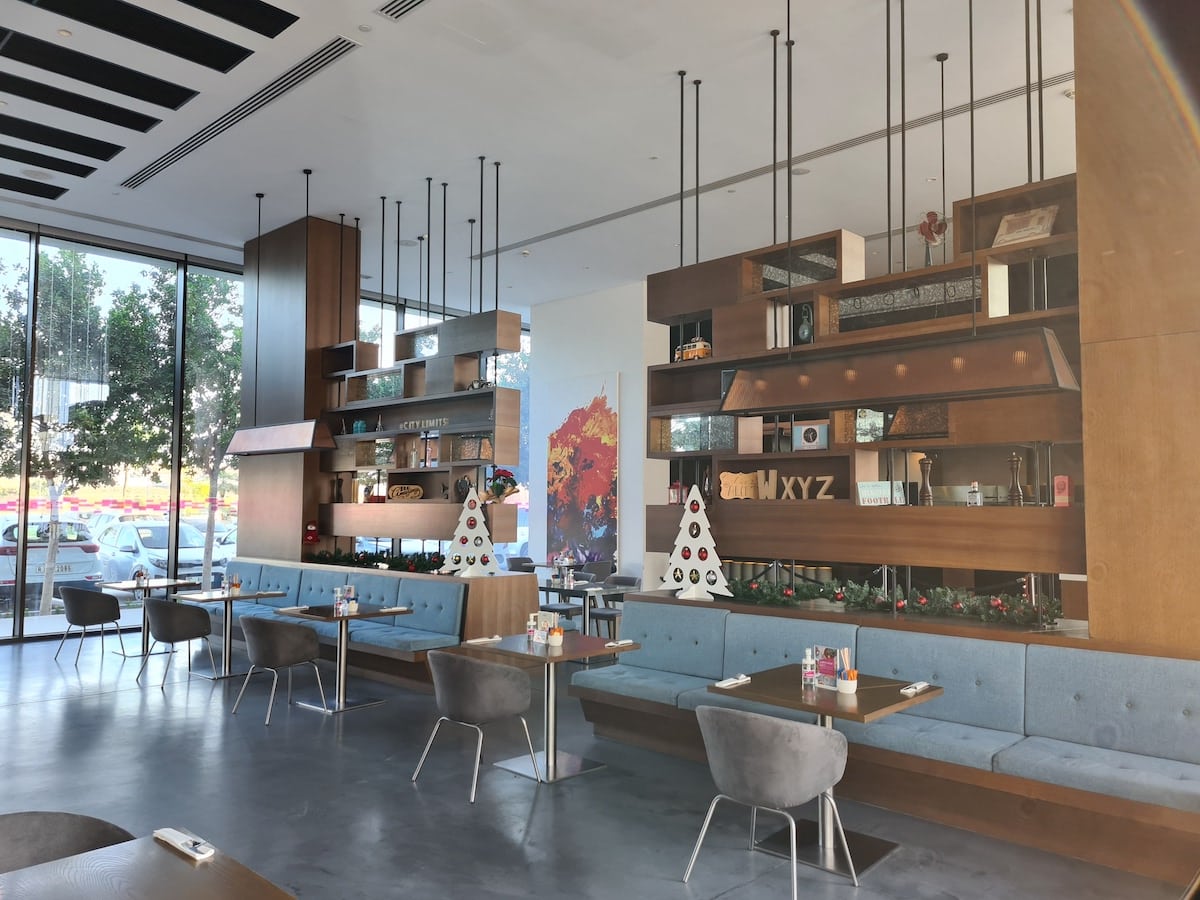 I only received coffee and mushrooms. Other tables received a bread basket, but that wasn’t an option on my card, and she didn’t offer it either.

After enquiring about the English breakfast, she said it is tea rather than the food option, and she was confused -but she didn’t come back to clarify or explain. So, we didn’t even receive the tea. LOL 😅

I just laughed it off and went to get a Starbucks from across the street. 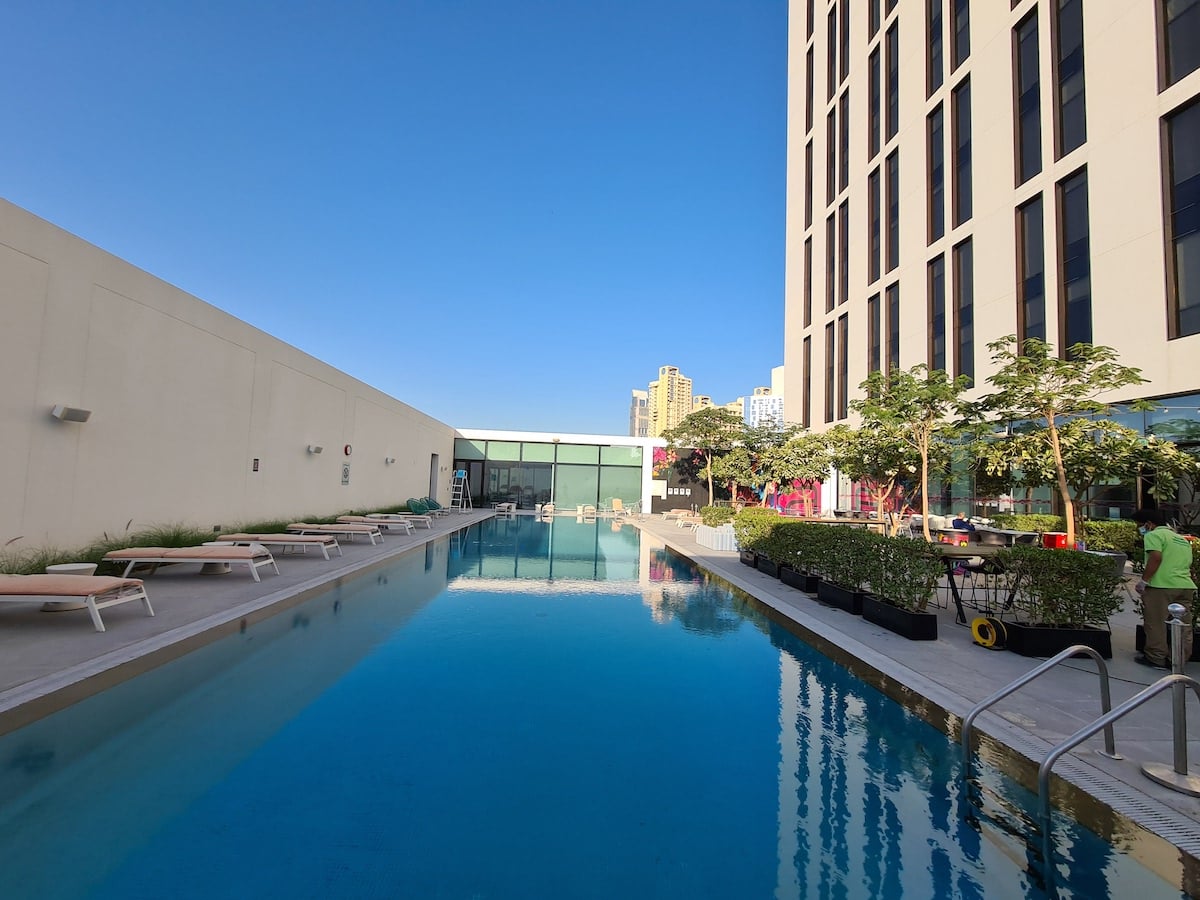 I have to say I liked the hotel’s vibe; it is modern, funky, clean and new—an excellent recipe for success. Sadly, buildings don’t make a good hotel without the people working in it, and I find that the staff need plenty of customer service and common sense training. 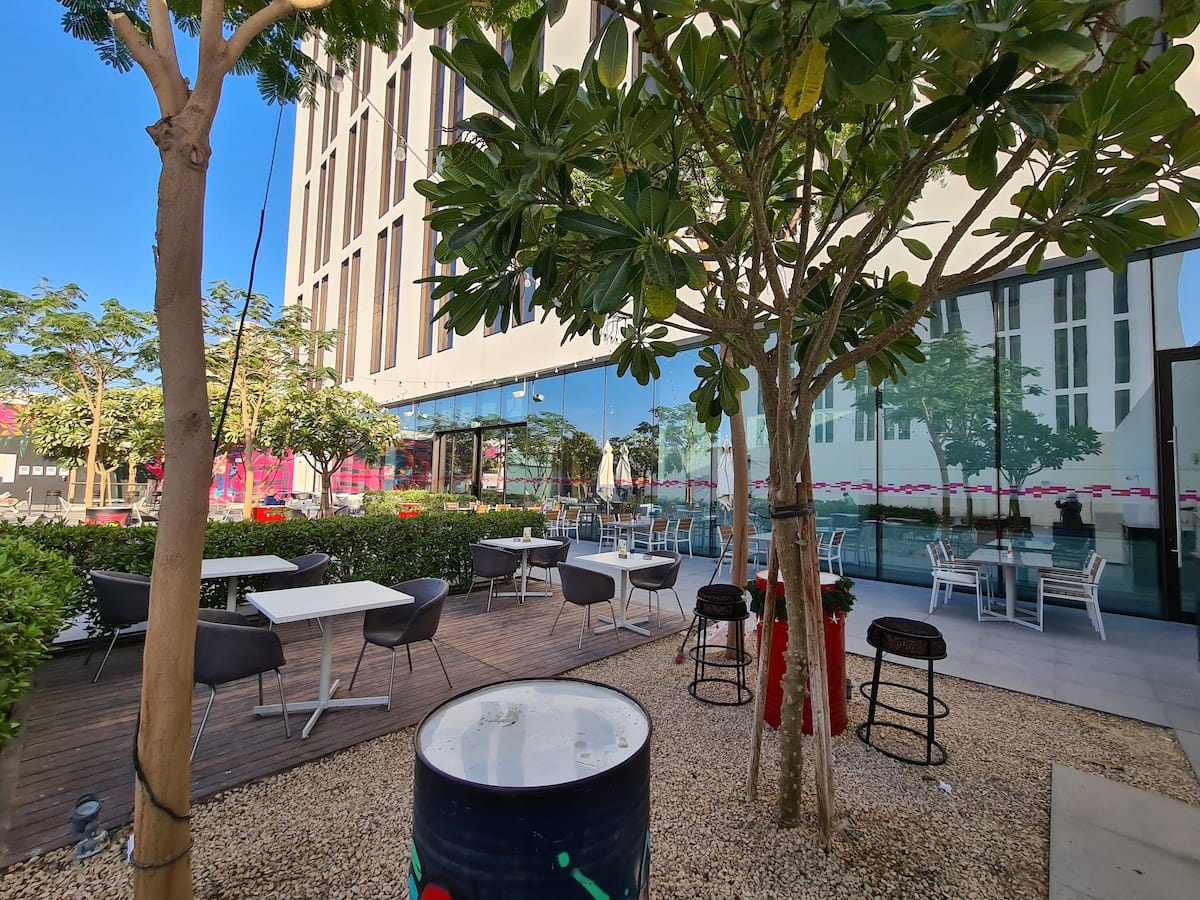 However, judging by that night manager and his back, I guess this is why it is not working.

Would I go back to this hotel?

No, I wouldn’t even if I was looking for a budget option. The hotel off-peak retails for around £30, which is a good deal for a new hotel but as a tourist destination, there is not much around it.

Dubai’s attractions are far away from it; there is no metro station there either. So unless you are driving and on a tight budget, I wouldn’t stay there.

Even with a tight budget, I have mentioned more central hotel options in this article here.

You can check my other hotel review of our two months stay in Dubai.