On our recent trip to Dubai, I decided to stay at a hotel -apartment instead of a hotel as with the whole pandemic and a little child, it just made more sense and felt safer.

I decided on the Marriott Executive apartments for two reasons. First, it was the fact that I was doing a status match promotion for Platinum and second because I got a fantastic deal on it—more on how you can get this offer at the end.

I am not a fan of the Deira area, to be honest, as I find that it is a little further away from anywhere and there are no much walking places around. Which I was correct about both since with the baby we had limited walking options for when I was working.

However, the hotel was fantastic, and I would happily stay there again.

The hotel is just 10 min from the airport so very convenient after a long flight or if you are arriving in rush hour and want to avoid going further into Dubai. 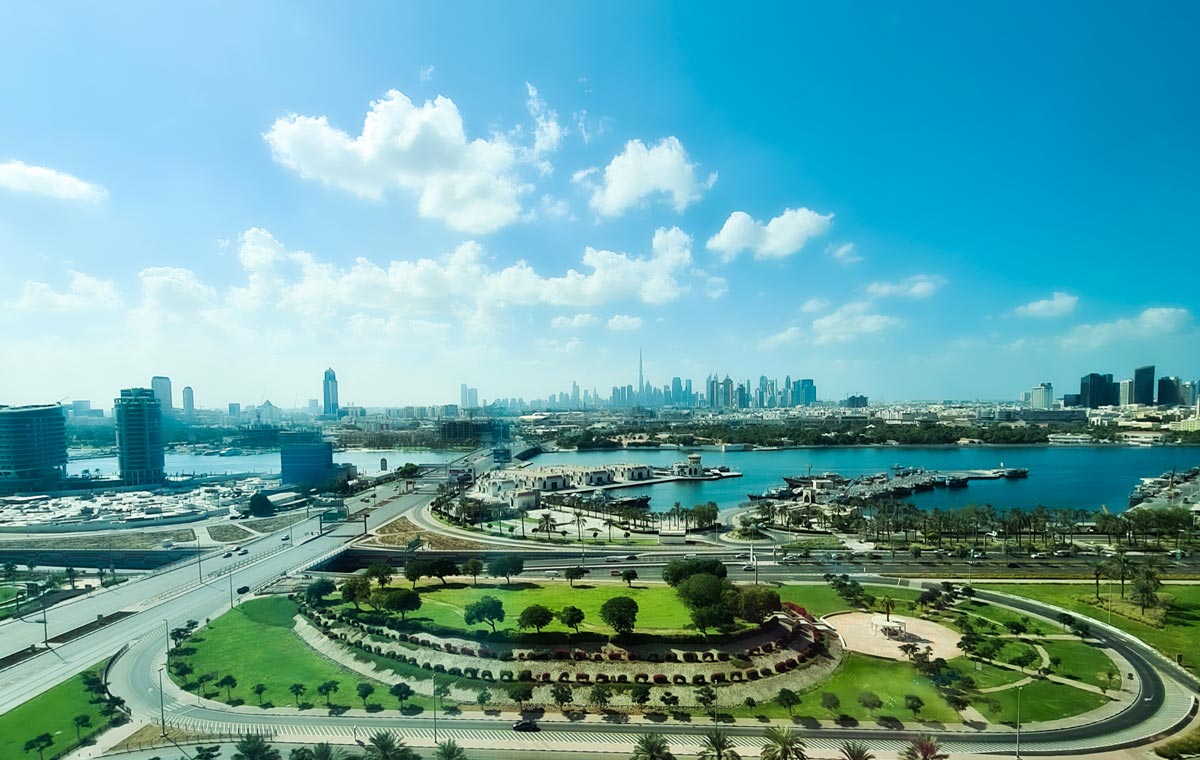 The view from the top bridge connecting the two buildings

The property is a mixture of long-term accommodation as well as a hotel. It has two towers connected via a bridge.

It is an old property but well maintained, and the beds are comfortable.

I had initially booked for three nights only to see if I will like the place before committing to longer.

They had upgraded me to a huge three-bedroom apartment. I didn’t manage to take photos as it was dark, but it had three big bedrooms plus kitchen area and a living room plus dining room.

Very spacious with more space than we needed even with a baby.

They don’t have any one-bedroom apartments, which is what I had initially booked, so they upgrade most of their guests. (at least at the time I was there) 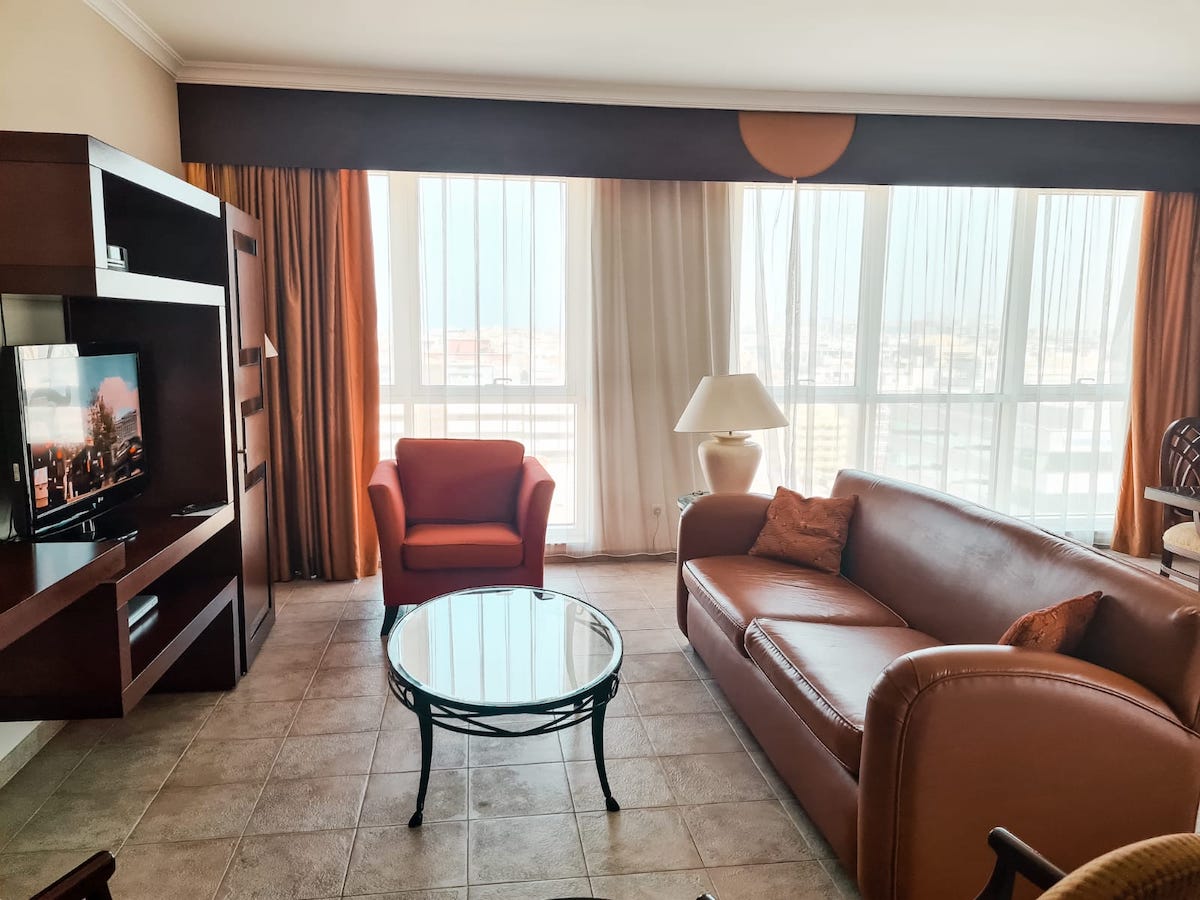 After the first night, I extended for another seven so in total we stayed ten days in the apartment although we did move to a two-bedroom which was still an upgrade from the one I had booked.

The apartments are very spacious although on the older side but well maintained.

We had a living room with a big dining table, a fully functioning kitchen with a washing machine as well as to bedrooms and plenty of wardrobe space. 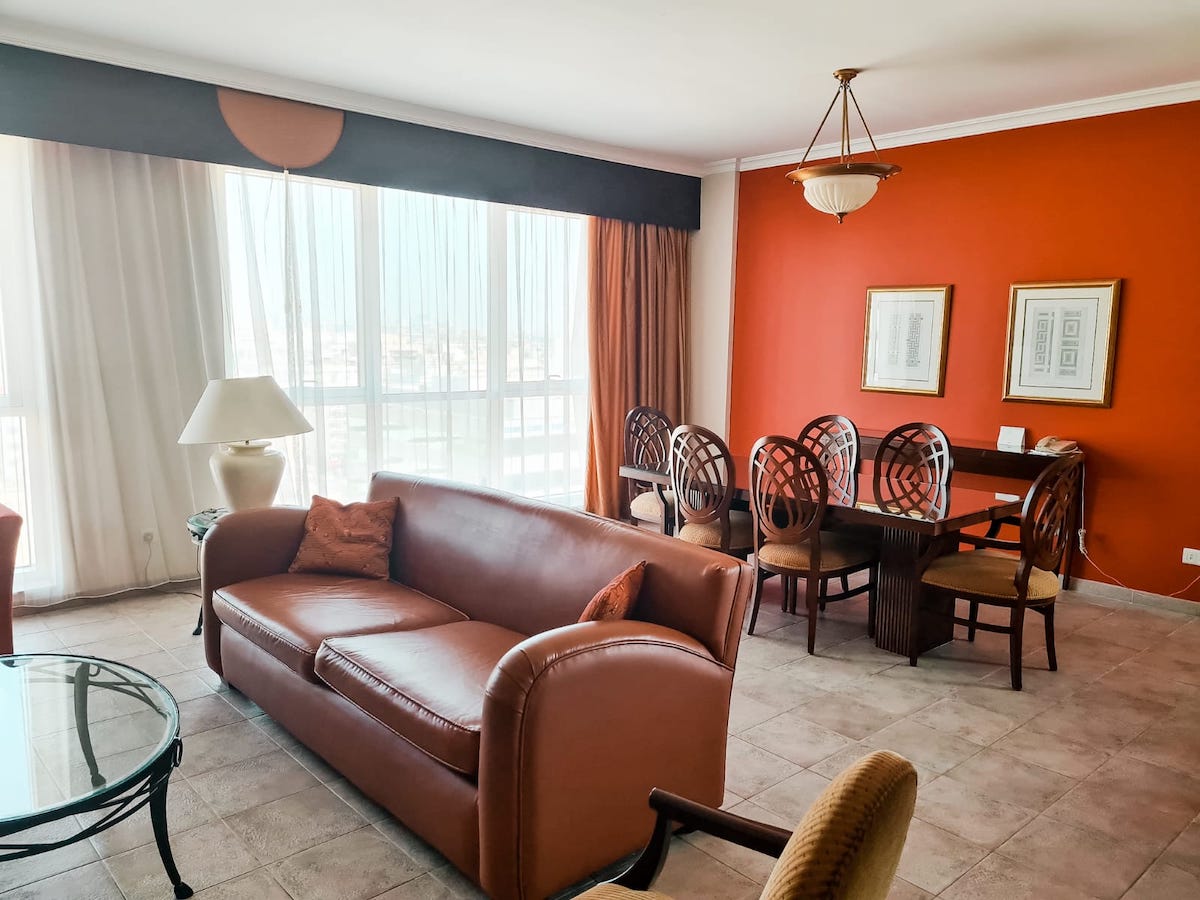 The kitchen didn’t have an oven, but it did have a dishwasher. 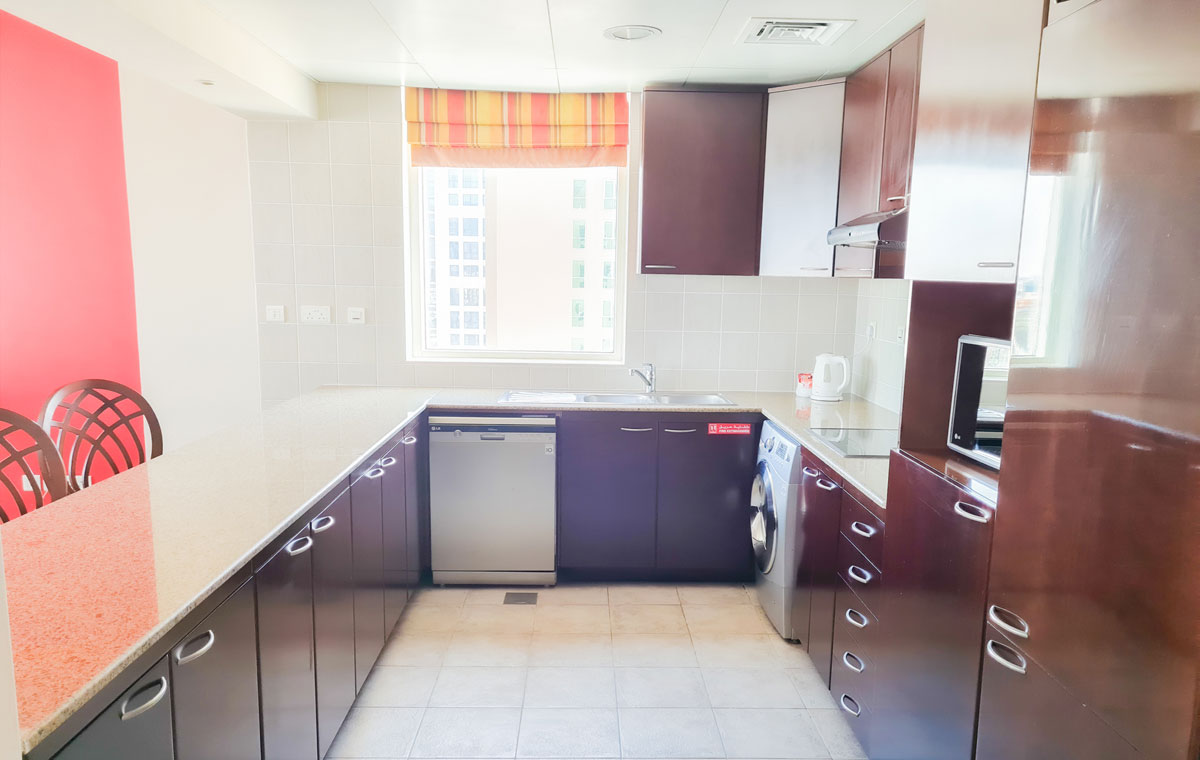 When Marriott Platinum, you don’t get any breakfast included at Executive apartments. We are not very big on breakfast, so I don’t mind, and we did make coffee and tea in the room as well as some snacks.

We did like the space in the apartment as mini MTG could run around and play, and also we weren’t on top of each other.

Above tower A they have a pool area, which is small but functioning. The jacuzzi was closed due to health reasons, but the pool and the kid’s pool were open.

Above tower B, there was a small play area for the kids, which is also very nice as it gives them something to do. I think most of the morning mini MTG was by herself playing there. 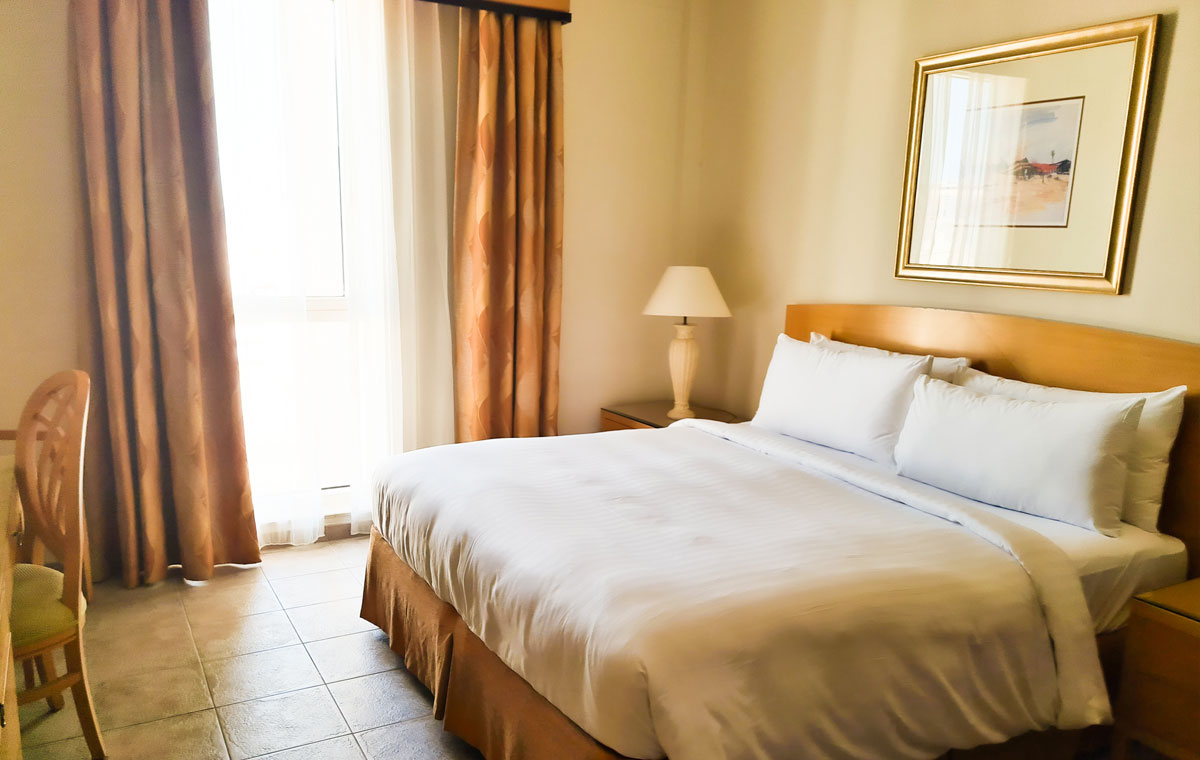 They could do with a swing though as this is our favourite game.

They also have a gym which I never visited, but it seemed well equipped.

The hotel has a pretty good location, and if we are to stay again when Sophia is older, or we are for visiting Dubai for shorter periods, I would happily book it.

As I mentioned, the hotel is only 10min from the airport, 10 minutes from the new Dubai Festival city mall and promenade as well as about 20min from Burj Khalifa.

The roads leading to the hotel are pretty easy to navigate. Because you don’t have to go to the small Deira streets, it is very conveniently located even at rush hour.

There is also a new mall called Deira City Centre mall only 10min walk from the hotel. Great if you want to buy your supermarket supply (they can also deliver) or enjoy a meal out.

The only negative for me was the fact that there are no walking or play areas for the kids. The area is busy with cars and not a place you can take a child to walk and run her energy, mostly when she was with grandma while I was working.

It is one of the reasons we moved out of the hotel, although the price was a good deal.

Of course, this is not the hotels’ fault but rather the location.

Getting a good deal

If you have not read my guide to Dubai where I share how to save money on your trip, then you are missing out.

Marriott Executive Apartments Dubai Creek, in general, offers a reasonable rate, however, if you have a MasterCard Marriott sometimes runs “stay 3 nights for 1 night free” or “6 nights for 2 free”.

While we were there, the promotion was on, and I managed to get a one-bedroom apartment for around £40 a night / 190aed.

They had pulled the offer during National day which is their busy period, but I am sure it will come back and definitely worth checking it out.

You can find the website for this promotion here.

Note this offer is only for the EMEA area.

Overall I would stay in again the in Dubai Executive Apartments Dubai Creek. The hotel is good value, big apartments and well equipped with everything you might need as well as kind staff and well maintained.

If you are on a budget and you are a larger family, it is definitely a place to look at while booking.

My other hotel reviews while we stayed in Dubai