This post is shared with us by sister Taskeen Jamal. She recently visited the Jabal al Noor mountain in Makkah during her Umrah. It is a place I still haven’t visited, so her article really inspired me to climb it up during my next Umrah insha’Allah (God willing).

The highlight of my Umrah trip in February this year was climbing up Jabal al Noor (Mountain of Light) in Makkah al Mukaramah, to reach the Cave of Hira. The whole experience was unique because for me it was a combination of physical (those legs don’t lie!), mental (lots of motivation and strength called upon to make it to the top) and spiritual (the serenity and peace you feel within and around you). 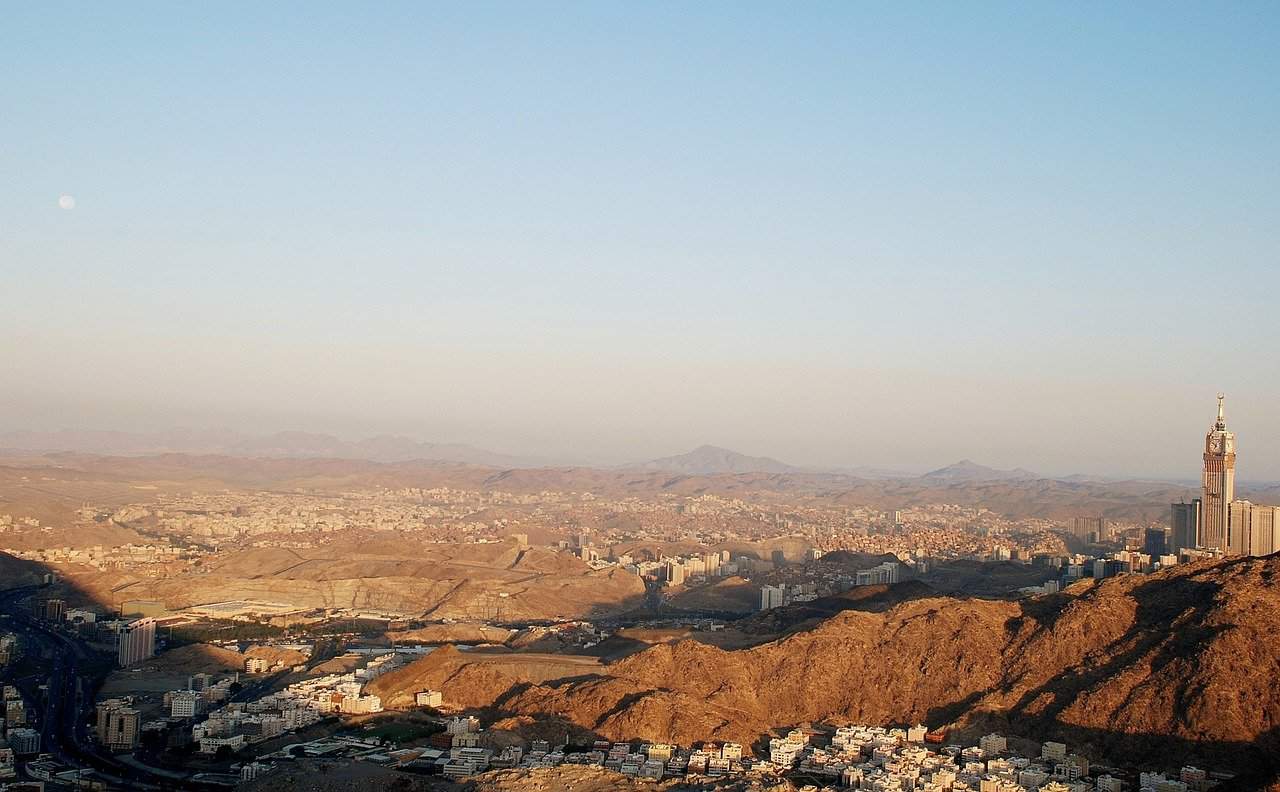 This place has historical significance for Muslims as the Prophet Muhammad (may the blessings and peace of Allah be upon him) used to climb this mountain for solitude and to mediate and it is here that he had received the first revelation from Allah (the Glorified and Exalted) through Angel Jibreel (Gabriel) in the Cave of Hira cave which is on this mountain.

It is not a religious ritual to visit this cave, except as a point of learning and to appreciate the significance of the events that took place there. I think it is a good idea to do the climb combined with ziyaarah (visits) to other important historical sites on the same day so that you know you are out for just those few hours.

It does offer a slight break from your regular daily routine for the rituals such as prayers /tawaf that you may have developed over the days before that so that you can return refreshed and rejuvenated to continue.

The day started at 3 am, where our guide took a few of us up 3km out of Makkah to the mountain (a short 12-minute drive). Landing at the foot of the mountain I felt tranquillity descend all around us. It was the time of “Tahajjud” (voluntary “night” prayer), and the stillness of the homes below us, the dark open air and the vast mountain is spectacular.

Apart from a small Turkish group descending, there was nobody else climbing up with us – so this time of night was a great idea (Especially when we drove by later around 9 am and we saw lots of people doing the climb at that time). It’s also much cooler in the early morning hours.

We began our climb walking at a reasonable pace, pausing every while to rest our pounding hearts and tired legs. The tour guide was great – he used his phone torch to light our way, kept us hydrated and fed with snacks along the way, and motivated with constant promises of “We’re almost there!” (for three-quarters of the way). I knew his trick but hearing the words helped especially in the last stretch which was a bit steeper.

There are ‘stairs ‘ carved out of the mountain now so I guess it’s much easier these days than before which I was grateful for. There are also handrails in steeper places. Through the climb, I found myself silently praying and kept contemplating how our Prophet Muhammad (May peace be upon him) did this very same ascent, walking upon this very earth and imagining the phenomenal life-changing event of revelation that took place right here. Those were quite powerful moments.

You don’t have to be super fit to manage the climb, and believe me nobody was wearing hiking shorts or fully kitted gear! I was able to do it in an abaya and an old pair of Sketchers trainers. There are, however, various resting spots along the way, with a covered area to sit under, and this is where some in our group stayed as they found it too strenuous to walk all the way up.

The elderly and pregnant in our group stayed behind at the hotel while we climbed, however if we knew about this first resting spot, they would have definitely joined us – there’re just a few stairs to the first “resting spot” and those that didn’t make it the full way spoke of their special time there, just taking in the atmosphere and praying so I highly recommend it for those who are not fit to do the full climb.

When we finally made it to the top, the view from up there is striking. We saw lights from the houses below you, and the beautiful Masjid-al-Haram (The Grand Mosque) illuminated in the distance.  There is a little shop up here selling snacks and drinks so if you needed any you were able to buy some.

I was able to offer some Nawaafil (voluntary) prayers in the cave itself, with only a beautiful grey cat as company. 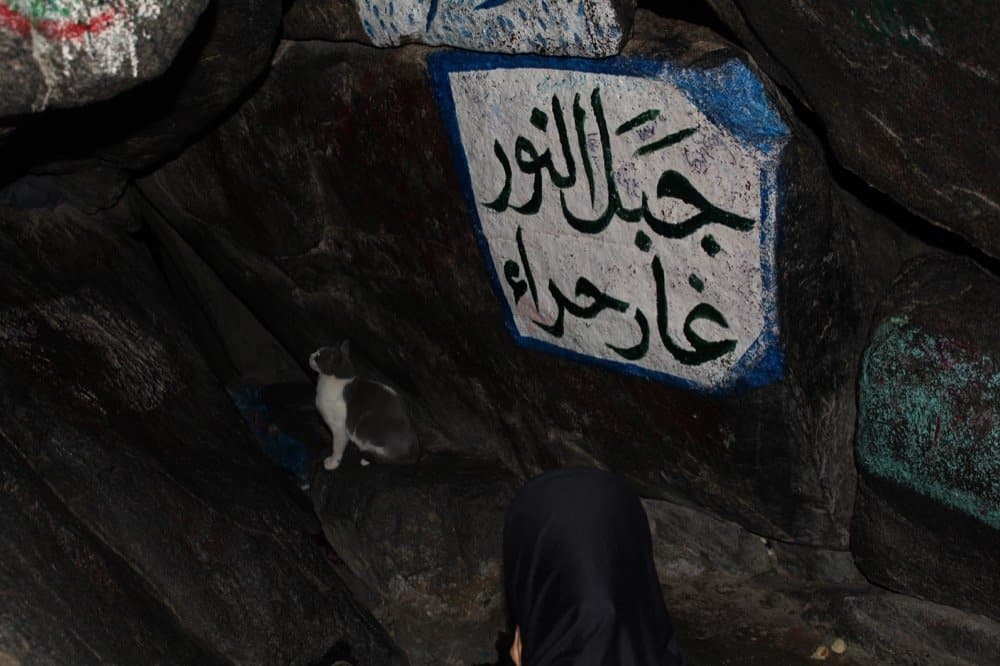 I am told it is not usually so quiet and there are always queues – so another moment of gratitude for the special time. We walked around the cave to some platforms for more views and we met a group from South Africa.

When it was time for Fajr (dawn prayers), the group formed a “jamaat” (congregation) for prayer, with the tour guide leading the group from the top of Jabal al Noor, overlooking the beautiful Masjid al Haram in the distance. Amazing! 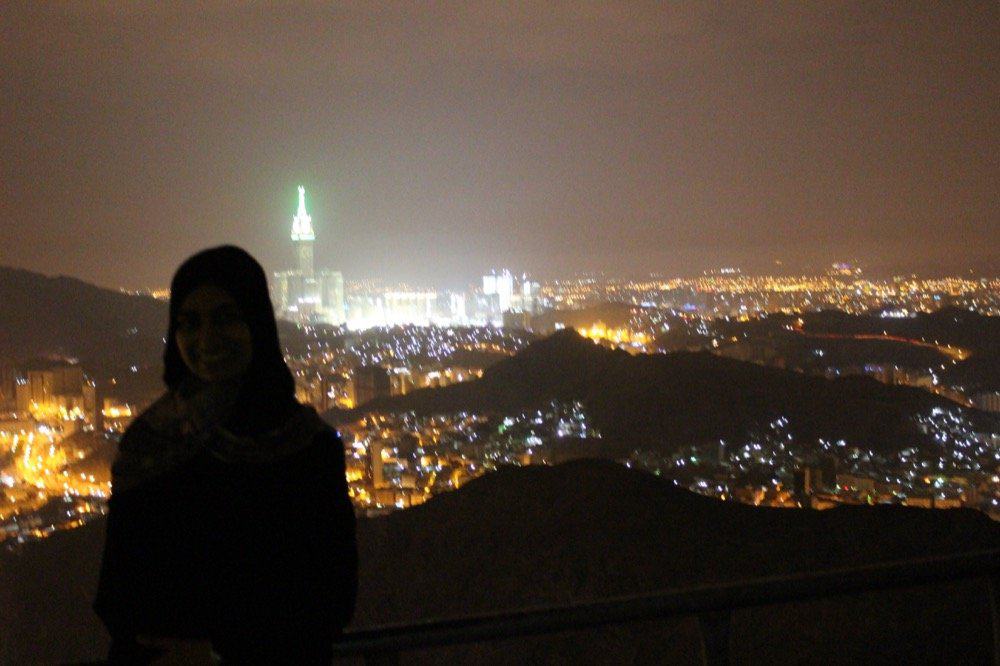 I wish I could have spent more time up there, but I enjoyed every moment. When we start the descent I found myself a lot chirpier, feeling more energised and excited. I practised my Arabic with the tour guide and that formed as a great distraction for me as we did the half-hour climb down.

Despite my early start that morning, after two hours of sleep the night before, and after two hours of the full climb and time spent up there, followed by the rest of the morning doing ziyaarah (visiting historical sites in and around Makkah), I cannot explain how throughout the day I did not feel any tiredness, grumpiness or fatigue. I felt content and analogous to the name of the mountain and a genuine sense of illumination.

Overall it’s a visit I highly recommend for anyone who wants to experience some of the historical places in Makkah and around. It makes the history we all learn about from a young age really come alive and combined with the physical aspects involved, it is invigorating and really meaningful!

Taskeen is a Lifestyle Entrepreneur focussing on inspiring healthy whole living. She loves sharing her travel experiences to help fellow travellers to be super organised when travelling because she believes: “Planning for fun is fun!”. You can connect with her for inspiration on Instagram.