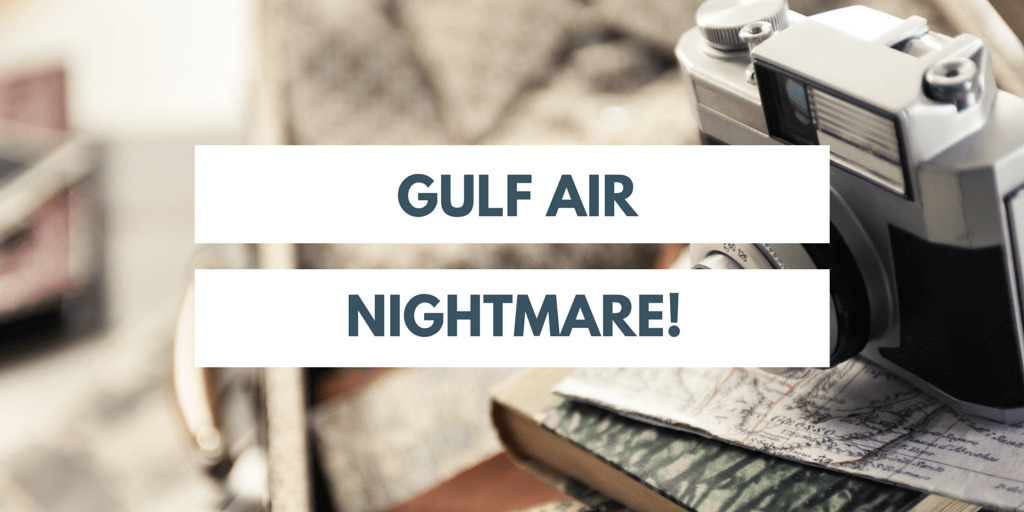 What I have been going through these past days has no words to describe my frustration. If you follow me on social media you know a little bit about my super unpleasant adventure with Gulf Air and their horrible customer service. Currently I am in Makkah to perform Umrah in the holiest month for Muslims. I had booked my flights from Abu Dhabi to Jeddah via Bahrain on Gulf Air; which I am totally regretting now, though at the time seemed like an awesome deal.

The tickets where booked through Virgin Atlantic as a redemption, and for 12,000 miles in business it seemed like too good to miss. I would be able to review Gulf Air and fly business in one of THE busiest times for Jeddah airport. Extra comfort is never unwelcome especially for Umrah. The flights didn’t go as planned and currently I am stranded with no return tickets and no luggage all thanks to Gulf Air.

I will be writing about it in more details but if you are planning a trip with Gulf Air think twice, thrice or maybe even a fourth time. It all started when I was in Abu Dhabi. On arrival I was informed that my flight to Bahrain was fine but my flight from Bahrain to Jeddah was not on the system and I could not fly. When I spoke with Gulf Air at the airport they were the least helpful people and said we are not listed blaming Virgin for this error. We decided to catch the flight to Bahrain and see what happens there since we had a two hour wait at Bahrain airport.

Upon arrival the transfer desk were even less helpful and the airport manager as well. They said it was all Virgin’s fault that they have not listed us on the flight and we should take it up with them. We couldn’t fly in business since it was fully booked if I wanted to fly I should pay $5000 each! I was happy to even fly in economy but this was never offered to me and no attempt whatsoever to offer an alternative. The manager said we should take it up with Virgin or call the Gulf Air customer service line. They didn’t even care about fixing the problem they just cared about actually giving you an answer and removing you from their desk. They were happy to leave us stranded in Bahrain for an error they had made.

I decided to call Gulf Air customer service via Skype since I didn’t want to pay roaming but she just said exactly the same thing even though I gave her the ticket numbers and everything i had from Virgin. I honestly felt like a ball being thrown at different directions with only an hour before boarding. My 45minutes of free wifi quickly finished and I had no choice but to call Virgin via roaming. I have said it before but I love Virgin’s customer service they are great and the lady I spoke on the phone really understood my frustration. Though she said the ticket on her end looks fine and they should not be doing this. I went to hand over the phone to the Gulf Air transfer desk agents who simply ignored me and kept talking to each other in Arabic. Totally frustrating and sheer arrogance.

Imagine that I was actually going for Umrah which is suppose to be relaxing and a spiritual journey. Well in this instance I was nothing but relaxed and to be honest if this had happened on my return I wouldn’t mind as much but I really wanted to be in Makkah in time for my Umrah.

The Virgin agent went on to speak to the Gulf Air customer service, while I was on hold. In the meantime it was only 10 minutes before boarding and the agents magically found a ticket for us in economy. Though they said we didn’t have a return flights and we should contact Virgin to sort it out.

Long story short the following day I spoke with Virgin and they went on for about two hours (!) to speak with Gulf air to sort it out. I think at the end she understood my frustration since English and Arab mentality are poles apart when it comes to customer service.

The tickets booked via Virgin were fine since the first leg of the trip from Abu Dhabi was OK and it was exactly the same ticket. Unfortunately their system had it coded under different reference numbers or something but if they had checked by our names they would have found the correct reservation. Not surprised they didn’t since they didn’t seem to care and just wanted to get rid of us. Customer service 0/10. The Virgin agent whom i was speaking on the phone actually re-issued the coupon which GulfAir used but they never marked it as economy but rather business. So Virgin thinks we travelled in business when in reality we travelled in economy and GulfAir made it seem like a they did us a favor by booking us in economy. Apparently now the tickets are sorted but I am dreading the moment I walk into Jeddah airport to be informed that I don’t have a ticket. Watch this space for further updates!

Apparently they were oversold and decided to pretend there was a problem rather than admitting it. It would have been a lot easier to just accept the downgrade and not put us through all this. I would have been happy to fly in economy and then look at compensation for the downgrade.

Best part of all

They lost our luggage somehow and for the past three days we are with nothing but the clothes we were wearing. We received 4 tags from Abu Dhabi though we had 2 bags, not sure why and how and we did see our bags leaving Abu Dhabi with us. I am not surprised we didn’t receive them on the airport since we only boarded 10 minutes before departure but 3 days later and no trace of them. No one of course is willing to help saying they are still looking for them and they will call us once they find them. Yah right! I won’t hold my breath.

Unfortunately it is the first time I put most of my things in the checked in luggage including my computer’s charger 🙁 since we were going to perform Umrah and it was easier for my husband not to carry them. I had so many things and plans of what I wanted to do including some videos and now everything is on hold. Plus since I am in Makkah there is no place were you can buy a Mac charger. We did have to buy clothes and essentials to get by but it has been 3 days already.

This must be by far the most frustrating, disappointing, horrendous and stressful trip EVER. I was so much looking forward to a relaxing and spiritual Umrah which is the reason why I booked business so I can remove some of the hassle and make it easy on us. However it turned into a nightmare with Gulf Air non-existent customer service, their arrogance and not communicating that they had oversold the tickets. I hope I receive my bags since I did have some valuables and sentimental items in there. 🙁

P.S. I would love some advice on how to go on with regards to claiming from Gulf Air and how to get them to compensate me not so much for the items but rather for the emotional and psychological frustration. I don’t even think this article can describe how bad it was.

P.P.S I just called Gulf Air to re-confirm my flights and they are saying my flight from Jeddah is not available and Virgin should have waited. I guess the saga continues. 🙁 Now I have to wait 24hrs to see if they will confirm seats for us.