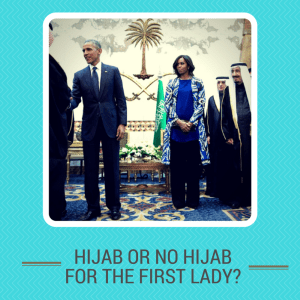 This is such a timely piece as I was thinking of writing something on this topic since I just returned from Saudi Arabia. This was one very interesting visit in a country I wanted to visit and had a small chance of living in few years ago. I came with a totally changed perspective and a real insight into the “life” in Saudi Arabia.

What is really funny is that once I entered the airport I saw many non Muslim women and even Muslims not covering their head or even their body with an abaya. Nobody said anything to them. Today I woke up with a media outrage on the First Lady Michelle Obama visiting Saudia and not wearing a headscarf. Does she really need to wear one? No she doesn’t unless she is visiting a mosque like she did in Jakarta where she did have her hair covered. Perhaps from a cultural perspective if she did wear it, it would have shown more respect and solidarity with the more conservative notables in Saudi. Not so from a religious perspective but rather a pragmatical cultural perspective. Especially considering that the biggest news media publications on this topic are from non Muslim rather than Muslims even in Saudi who are used to seeing visitors and guests not wearing a headscarf.

For me Saudia is a country of contrasts on so many levels, it is very hard to actually differentiate from what is cultural and what is Islamic in this country.

Only Muslim women are required to wear a headscarf in Saudia Arabia and this is because I saw women that didn’t wear it and I asked my friend why this was the case. As I was pretty sure the rules were for all. This is not the case and it depends on where they are as many don’t cover their head but rather only their body with an abaya. For example Riyadh the capital is a more conservative place and women cover most of the time as they do have female police officers telling them off. Jeddah and Khobar where Aramco is are more modern with less emphasis on being fully covered. There are many expats who live there and I saw many women who didn’t wear abaya or a headscarf. It is very interesting though that they would make such a big fuss out of the First Lady not wearing a headscarf. Considering that I am a convert I made a personal choice to accept Islam, however if I was in the same position as Michelle or other non Muslim woman I will most likely not cover. What I find in Saudia is that they can be  superficial in many aspects of their lives unfortunately. Such as hijab, driving, and other controversial topics.

This is a massive topic overall of whether women should drive. Muslim women in other countries are free to drive and have no problems with this even in the Middle East. The problem is specific to Saudi where there is a law against female driving. Though there are two things here with regards to women driving there. As a woman I would love to have a driver and not to worry about parking, why do only big politicians and business men get to consider this a luxury and for women it is oppressive. Though this is an entire topic on it’s own. 🙂 Second I am pro women driving and having this freedom, I enjoy driving as it really helps clear my head.

However I do not know why women would like to drive in Saudi Arabia. The guys there drive crazy! Even if it was allowed for me to drive in Saudia I would never drive by myself. The fact that I will have to deal with crazy drivers who have no respect for laws or the human life is enough to put me off. The stress alone of trying to manoeuvre through the streets is enough to make me hire a driver. Before I visited I was pro driving after my visit I would discourage women from driving until the men there learn How to drive. In recent stats in the Gulf region the most of deaths are due to car accidents with Saudi Arabia in the top of the list. I thought that driving in Bulgaria is bad but this is 10x worse. Though giving them a choice is much better than imposing one of them and they should be able to make their own mind up.

Really? For example when ordering food females and males order from different counters. Is this what segregation is about. I doubt it. As I said before everything is utterly superficial when it comes to many topics. The fact that the family section is with the female section where there are men seated is enough to get you thinking. What is the real benefit. I have many friends and I know first hand how easy and creative they get in order to date and do other things that are not permitted. Maybe because I come from a different culture but I don’t think that the forbidden works as it makes it much more attractive. Teaching Islam, which might seem utopia, has actually better chances of dealing with the real issues than gender segregation. The fact that I order from a different counter or I board my plane form a different queue but I end up with a bunch of males in the bus to the aircraft is not segregation for me. It has no real benefit to me as a woman or to the fact that there is less temptation. 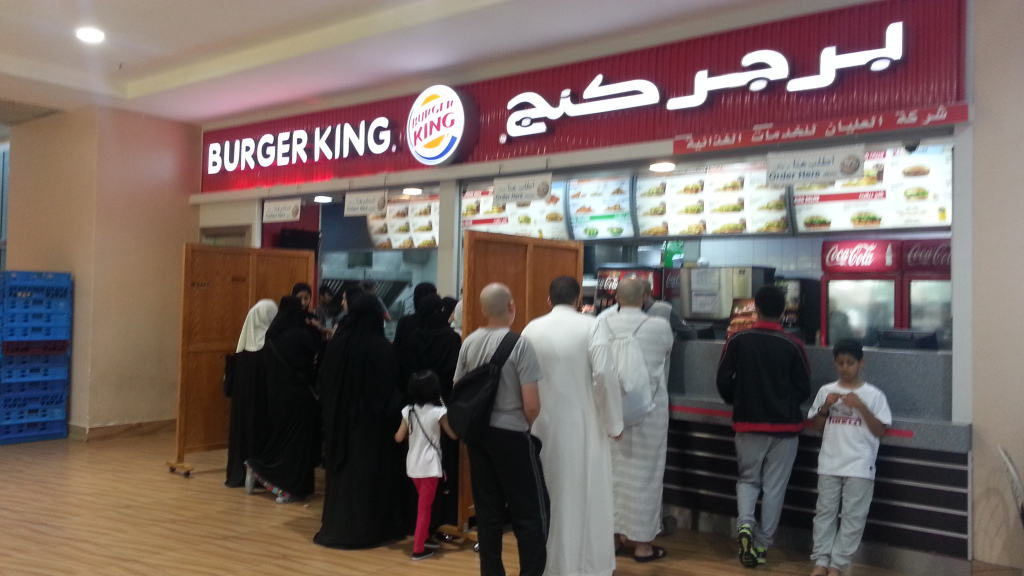 How do we order in Saudi 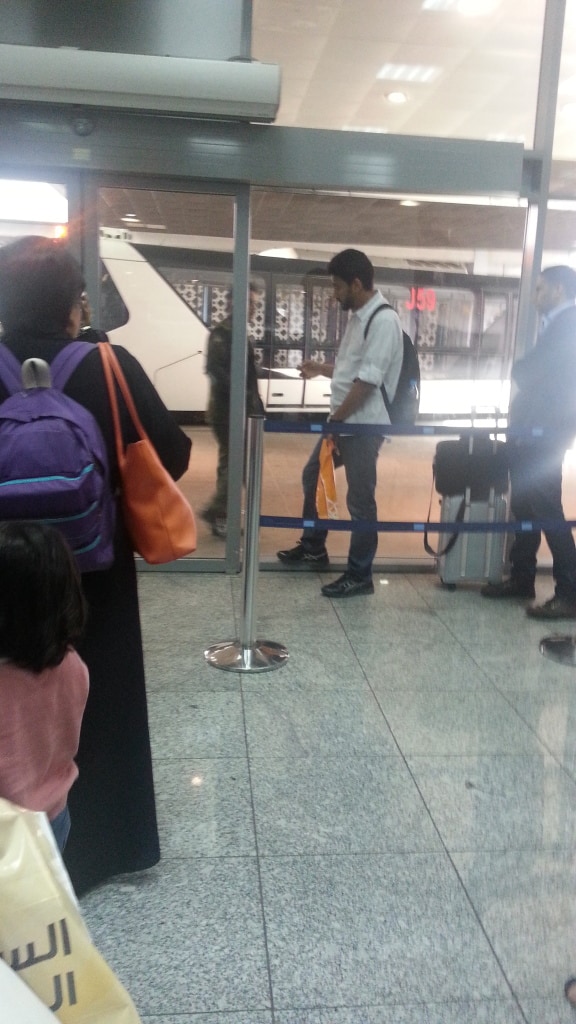 Waiting for the airport bus to take us to the plane

Teaching the real values of Islam, the beauty of how to really lower your gaze and how to respect the laws, cultures and other differences can actually make it work. There is no real value on imposing hijab to non Muslims. Islam says there is no compulsion in religion we are free to chose what works for us even though we know that Islam has guidelines God gave us the choice. There should be no big deal of why a non Muslim woman didn’t wear or shake hands with the King. It should be about teaching men and women that respect is one of the teachings of Islam and we should not pick and chose what works for us.