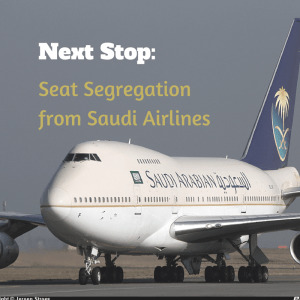 *****The initial article seems to be fabricated. However if you want to read my views in case they ever introduce such policy feel free. 🙂 *****

Oh boy, all the blogs are having a field day with the news that Saudi Airlines will be introducing a new quirk of gender seating segregation. I have so many thoughts in my head and I need to sort through them all. I want you to know that mostly I write from my perceptive as a young professional woman who became Muslim 6 years ago by choice. I have no cultural attachments that many associate with Islam but I rather practise Islam to the best of my abilities. Having many friends from Saudi Arabia I do understand their cultural mindset as well and the way they might think about this.

From an Islamic point we are supposed to be segregated and not mixing freely with other males unless for specific reasons. Saudi Arabia is a conservative country by many standards and they do uphold some of the values of Islam  though mixed with culture as well. They don’t serve alcohol or pork and have prayer facilities on the plane which is a nice touch as I have missed prayers due to the lack of such space. I like these things to be honest though I know many frequent flyers will ignore the airline due to the dry flights. I will be flying with them in the very near future for my Umrah and I am happy that I don’t have to sit next to people who smell of alcohol. I don’t have any problem with people drinking even when my own family does but 30,000 feet above dry land and in a small space is not my on top of my list. The airline is a national carrier of Saudi Arabia and the majority of people who actually fly with them are either Saudis or people who travel for Hajj and Umrah. So I would assume they are  mostly Muslims, for whom these things are not an issue.

In the article I found in the Daily Mail it seems to say that many males complain that they don’t want to have their female relatives sitting next to other males. I wonder if actually a woman had complained if they would change the whole seating arrangement. If it was such an issue women can sit in the window seat with their male relative next to them, which is exactly what my husband and I do when we travel. I understand why males would not like other men sitting next to their women however in today’s world there is hardly any segregation. Unless these females travel alone out of Saudi Arabia, which is not really possible as they require a Mahram. I know men by nature are protective of their females wether they are Christian, Jews, Muslims or Atheist.  I don’t see anything bad about it, however perhaps the reasoning should be different of why Saudi is introducing segregated seating. I find this quite a weak argument unless there are different reasons which are not made clear.

A better argument for me would be the comfort of female travellers. Before I become Muslim I used to travel alone and I am sure many females will relate that we do have the fair share of creeps when travelling alone. I have had incidents in planes while half asleep of guys looking at me, or trying to chat me up and stuff like this. It does make you feel uncomfortable and vulnerable. I don’t think it has anything to do with religion. Today when I travel I do prefer sitting next to women just because it is more comfortable and I don’t have to be squashed in an economy seat. I don’t like rubbing shoulders and knees with males I don’t know and for that matter even with males I know.

If I had to make a choice of whom I would be sitting next to it would be my husband or another female just so I feel more comfortable. I don’t find it offensive and I am sure that many women will be happier to sit next to another woman than a man, whether they are a Muslim or not.

Yes Saudis are conservative and maybe they are introducing this scheme because of the wrong reasons. To protect some overly jealous Muslims in the name of Islam of having males sitting next to their wives or daughters. But I will be happy to have such a scheme if I will be travelling alone for the argument of comfort and security. For those who will say that such schemes are backwards or not necessary, I will argue them to check with some females who did have uncomfortable experiences in planes.

I will be travelling on Saudi Airlines very soon and I can’t wait to share my experience, though most likely I will be sitting next to my husband. 🙂