A friend of mine stayed in the Fairmont Hotel in Makkah, which is a five star international brand. It is located in the Abraj Mall in the Royal Clock Tower amongst many other hotel chains.

When I was visiting Makkah I wanted to stay in the Fairmont to try it out, since I had a free upgrade certificate from the BoardingArea conference. However I opted not to move hotel and decided to spend all my time in the Hilton Makkah. You can read my full review here.

The review below is his own which he posted on TripAdvisor and forwarded the link to me. I decided to re post here for your benefit and since I do trust his opinion. He is well travelled with an acquired taste ;).

The Fairmont among other 5* hotels are located within the Abraj (towers) complex that holds the famous Clock Tower. It lies the third tallest building in the world – a pretty remarkable achievement.

On arrival, entrance to the Fairmont is via the underground tunnel which also leads to the Swissotel and Raffles; the actual entrance to the Fairmont is a dead-end, barricaded behind temporary road blocks. At prayer times this area is completely rammed and thanks to the local police you stand little chance of getting in; so ensure you arrive outside these times. If arrival is by taxi you will need to walk to the far right entrance and request assistance to off load. Concierge are very helpful. All my luggage was received intact and promptly in the room.

Floor M2 is the lobby area where reception is located. The lifts to M2 are double the standard size which provide access to the al-Haram ground floor however despite their size are often full and busy. People tend to push in and unfortunately wheelchairs and pushchairs are sidelined.

Reception was busy but being a President Club Member, a separate desk is provided. Omar at the desk was exceptional. He was efficient and within minutes we were directed to the lifts to our room. 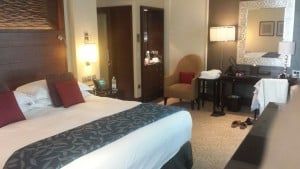 From M2, two sets of six lifts lead to the rooms. six each to floors 1-16 and 17-29. During our stay of two weeks two of the six lifts to floors 17-29 were out of order and remained so throughout. Again, during prayer times chaos ensues. On occasions it was intolerable. In a Fairmont hotel you’d expect people with a bit more class and courtesy; unfortunately not. The Saudi’s in particular are worse but this can’t be helped. My gripe was with the hotel security. They overlook all entrances and lifts and did very little in managing the problem with the lifts. In fact, time and time again they stood around playing with mobile phones; completely inattentive to the job at hand. Let me give you another example, the lift alarm sounded due to lift overload and you’d reasonably expect the last person who entered to step out. No chance; they’d expect somebody else to leave, such was the dim mentality. 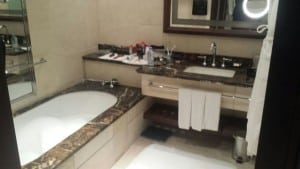 Another alarming issue was the level of racism towards non-Arab staff AND fellow residents. On one occasion an Arab demanded an Asian hotel worker to leave the lift and use the staircase instead. I tried to intervene but was unable to do so.

Our room was located on the higher floors and was exceptionally well laid out with a walk-in wardrobe, large bathroom with a walk-in shower and bathtub; the desk, seating area and king bed were all typically Fairmont standard. Needless to say, the Le Labo toiletries were equally good 🙂

Breakfast was served in the beautifully decorated restaurant on the 29th floor. It does get rather busy between 9.30 -10.30am. 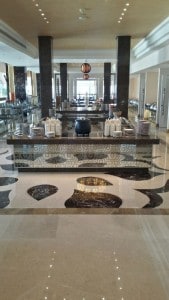 The spa and fitness centre is located on Floor M1. Excellent facilities with probably the best staff this hotel employs. Period.

A lady by the name of Rahmah from Guest Relations (GR) called our room several times but after the first call I realised it was pointless. She robotically asked several questions in one go, ‘thank you and goodbye’. I guess it’s something enforced by Fairmont but remains a mere tick-box exercise. Her limited comprehension of English was probably a factor. I detest being called ‘Mr’ followed by the ‘first name’. It’s just wrong!

Having stayed in landmark Fairmont hotels around the world; from the Château on Lake Louise in Canada to the Fairmont on the hairpin bend in Monte Carlo, Monaco, I feel the Fairmont Makkah Clock Tower is a real let down and liability. Fairmont need to act drastically to protect it’s brand from further embarrassment. 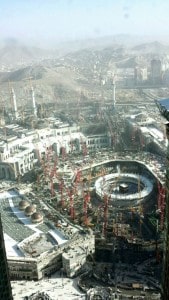 So notwithstanding the above, this is the perfect place to stay with delightful views of the city and al-Haram.

I haven’t stayed myself in the hotel or the Abraj Mall however I did expect it to be troublesome to enter and exist during prayer time. One time I was almost stomped and cramped near the Abraj Mall after prayer. This is the time I knew I chose the best hotel in Makkah to stay, it was never busy and it took me less than 5 minutes.

The most shocking part for me, which I will discuss in a separate article, is the open racism against non-Arabs. This is appalling for me and a sad reality. Islam never discriminates and it is so sad to see people in the holiest place on earth to go against those principles.